The Most Bittersweet Time of the Year 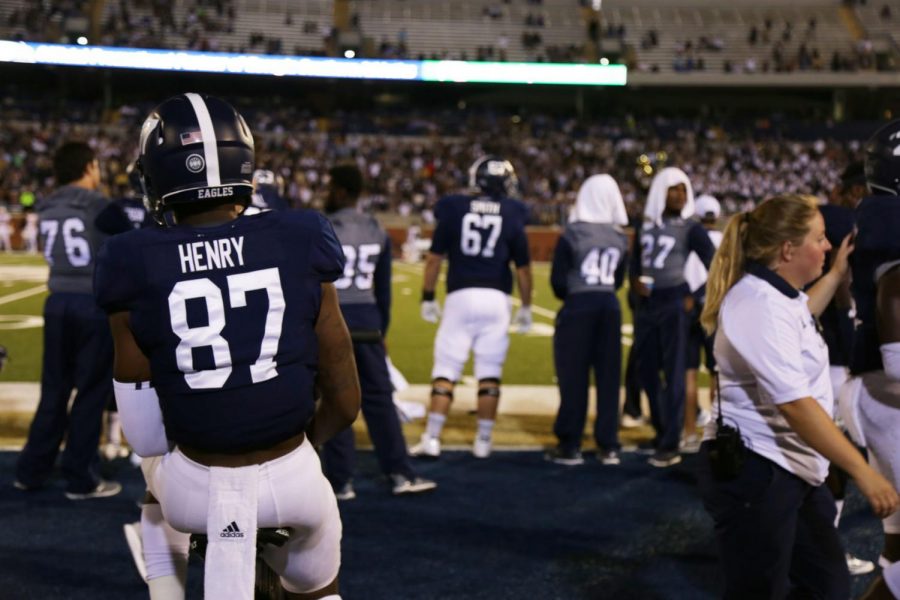 Junior WR Malik Henry stays warm in the stationary bike on the sidelines.

For those of you unaware, the NBA season officially begins Tuesday, October 17 at 8 p.m. as the Cleveland Cavaliers face-off against the Boston Celtics, marking the end of one of the most dramatic and wild NBA off-seasons in recent memory.

Even casual NBA fans will notice some pretty drastic changes this season, as more and more NBA stars made some big moves this season -reviving old rivalries, hurting feelings and creating some of the juiciest beef you will ever sink your teeth into.

But for those of you who haven’t gotten the chance to keep track of the drama, here is your pre-season primer for all the biggest names in basketball and what you can expect on (and off) the court this season.

Taylor Swift wasn’t the only celebrity wading through a sea of snake emojis on Twitter. Kyrie Irving earned a lot of enmity for his off-season behavior after reportedly stating outright to the Cavaliers front office that he wanted to be traded to another team, kicking off a drama packed period of speculation and hot takes, the likes of which have never been seen. The situation only intensified once it was announced that he would be traded to the Celtics, in an exchange that sent Boston’s enigmatic point guard, Isaiah Thomas, to Cleveland, a move he made clear he was unhappy with. Can’t blame him either. During Boston’s playoff run that past season, Thomas’s sister was killed in a car crash before a game and he still made it out for the contest, and managed to bring the Celtics a win and one of their best playoff runs in recent history.

Coming into the league in 2010, Hayward was a fixer upper for sure. Although he had a great run at Butler, he developed many of the skills that make him such a high value player during his time with the Utah Jazz. But just like any true scumbag ex, Hayward took advantage of Utah’s patience during his budding years in the league, and moved along as soon as a better offer came along. Worse yet, he moved to the team, now led by his former college coach. Suspect to be sure.

Often hailed as one of, if not the, best pure point guards in the league, Chris Paul clearly got fed up with underperforming in L.A. under the tutelage of the venerable Doc Rivers. Despite often being named one of the best players in the league, Paul has never even made it to the conference finals. Here’s hoping that James Harden and that magnificent beard can give him the edge he needs to push past that barrier.

Paul George kicked off the new trend of NBA stars packing their bags and heading to Oklahoma. On the heels of yet another disappointing playoff run in Indiana, George reportedly made it very clear that he didn’t want to stay in the organization, leading to one of the most nerve wracking parts of the year: speculation. After the rumor mill cycled through essentially every possible team he could have possibly landed on, George shocked many and ended up signing a one year contract with Thunder. A team with plenty of potential but not exactly poised for a championship, at least not at the time…

Easily one of the most confusing transactions of the year came in the form of the Bulls dealing away their perennial star, Jimmy Butler. This may have come as a shock to some, considering Butler was one of the few shining spots in an otherwise depressing stretches of Chicago basketball. Butler wasn’t nearly as deadly an offensive and defensive weapon coming into the league as he is now, and for the most part had a quiet but steady rise to stardom in Chicago. On top of this, once Derrick Rose began to show signs that he may never recover to the level he was before, Jimmy began to have to take more and more of the workload in Chicago, becoming an unlikely fan-favorite. The move may be more emotionally disappointing than professionally however, Minnesota managed to assemble quite a squad over the summer, making them a serious playoff contender in an already stacked Western conference.

The former Rookie of the Year and league MVP, Derrick Rose has landed on some hard times lately. After suffering multiple injuries over the course of his career, Rose just hasn’t seemed the same player he was coming into the league in 2008. Conversely, Dwyane Wade, has experienced a storied and successful NBA career, but after 14 years of intense play, Wade may be coming in on his last legs. So no better home for these two wayward sheep than the equally despondent Cavaliers. This off-season hasn’t been too kind to Believeland, losing their second best player, and arguably the future of Cleveland basketball Kyrie Irving, the core of their team seems to just be getting older and older. This paired with intensifying rumors that the King, LeBron James, may be headed elsewhere at the end of his contract, has left the Cavs starving for something. Anything.

The patron saint of the Knicks was yet another franchise player who made a startling move this off-season. After an incredibly tense regular season with the Knicks, Anthony didn’t hide that he was harboring some resentment for his organization’s front office. This coupled with his inability to win a NBA championship has led us to the greatest form of Melo that may have ever graced this plane of existence, Hoodie Melo.

Ian Leonard is the Enterprise Managing Editor for The George-Anne. He is a senior writing & linguistics major from Johns Creek, Georgia. His love for basketball began after watching ESPN documentary “Bad Boys” and is a Portland Trailblazers fan despite his best interests.