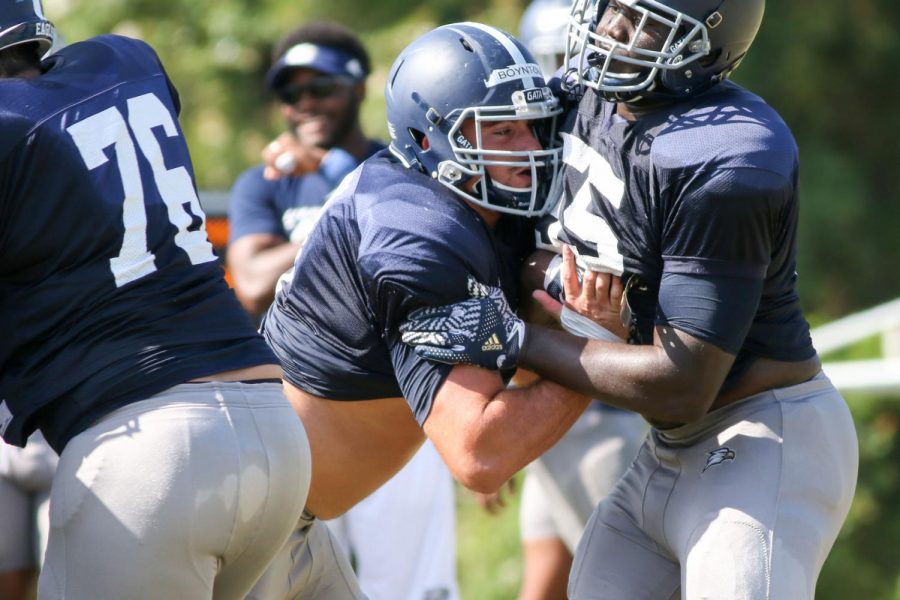 GS left tackle Tommy Boynton drives a teammate back in a practice this fall. Boynton and the Eagles offensive line have a challenge on Wednesday with last season's Sun Belt Player of the Year in Arkansas State's Ja'Von Rollan-Jones

It is already October, and Georgia Southern has yet to play its first home game of the season.

That will change on Wednesday night at 8 p.m. when the Arkansas State Red Wolves (1-2) visit Paulson Stadium for the nationally televised conference opener.

The matchup was slated in the same early-October Wednesday night ESPN2 slot last season, and the Eagles – who were 3-1 at the time – lost in dramatic fashion to the Red Wolves, who were 1-3 at the time.

The game proved to be somewhat of a turning point for both teams – in opposite directions. Arkansas State’s season went uphill as they finished 8-5 (7-1 Sun Belt) and won the Cure Bowl, while the Eagles struggled to finish the season and wound up 5-7 (4-4 Sun Belt).

This year, GS has the opportunity for a turning point of its own.

Head coach Blake Anderson, in his fourth season at Arkansas State, has led his teams to the Sun Belt title in each of the last two seasons.

So far this year, the Red Wolves have been potent offensively but have allowed opponents to score over 40 points in two of their first three games.

At quarterback, redshirt junior Justice Hansen has been spreading the ball around to his impartial jury of receivers impressively so far, completing 68.8 percent of his passes with 10 touchdowns and only two interceptions through three games.

Six ASU receivers have amassed over 100 total yards receiving this season, but none has cracked the 200-yard mark, which shows Hansen’s ability to find the open man, no matter who that may be.

“We feel really good particularly when we’re healthy in our secondary, we feel like that’s one of the strengths of our entire football team,” GS head coach Tyson Summers said in a press conference last week.

Summers added that Arkansas State runs a lot of short routes, so he said the number of catches doesn’t necessarily speak to how dangerous the ASU passing attack is.

ASU Junior tailback Warren Wand is only 5 feet 5 inches tall, but he was Second Team All-Sun Belt Conference last season. He can be hard to find behind the ASU offensive line and hard to tackle with his low center of gravity.

On defense, the Red Wolves allowed 44 points to SMU and 48 to Nebraska, but they have talent.

Last season, senior defensive end Ja’Von Rolland-Jones was just the second defensive player ever to be named Sun Belt Player of the Year. He was fifth in the nation in sacks, but he has yet to get going this season.

“He [ASU defensive coordinator Buster Faulkner] usually plays with a very dominating defensive front,” Summers said. “He’s got two guys on his defensive line this year that jump out at you, as good as anybody in the country.”

Wednesday night can’t come soon enough for this Georgia Southern football team who has had just as many off-field distractions as on the field action.

We prefaced this before the game against New Hampshire but that ended up being six hours away in Alabama, not the “Prettiest Little Stadium in America”. This game will be the official home opener, a game GSU hasn’t lost since 2006 to kick off the worst season in program history.

Since the transition to FBS, the Eagles have gone 3-0 in Sun Belt openers outscoring opponents 96-35. Coming home finally should get rid of the hostile environments this team has had to deal with both in Auburn and Bloomington.

It’s hard to guarantee there won’t be some hostility towards this team and coaching staff, but it won’t even be on the same level as it was in Jordan-Hare a month ago.

Arkansas State is bringing five different big playmaking receivers wednesday night and that means the GSU secondary has to play lights out. Summers is aware of this and attributes to the corner position, saying “you’ve gotta be somebody that can play and whether a big play or a big play happens on you, you’ve gotta put it behind you.”

So far, the secondary has been adequate. They’re only allowing 166 passing yards a game, but they’ve played three teams that are heavy run teams, and those teams have been able to run all over the Eagles defense. GS is allowing nearly 260 yards of rushing per game.

Sophomore linebacker Todd Bradley and redshirt junior safety RJ Murray have been the backbone of this defense with 17 tackles each. The defensive line, other than Logan Hunt, needs to step up and be a force for the running game against a passing offense like Arkansas State’s

As a redshirt freshman, it was expected that there would be some growing pains for starting quarterback Shai Werts. Having two of his first three starts against power 5 defenses isn’t a huge confidence booster.

On the ground, he’s only averaging 60 yards despite and in the air it’s 77 yards and a big sum of the passing yards was because of the huge 63 yard touchdown pass against Indiana.

This game could be a bellwether of how Werts will fare against Sun Belt teams for the rest of the season or if Summers will make a change at quarterback.