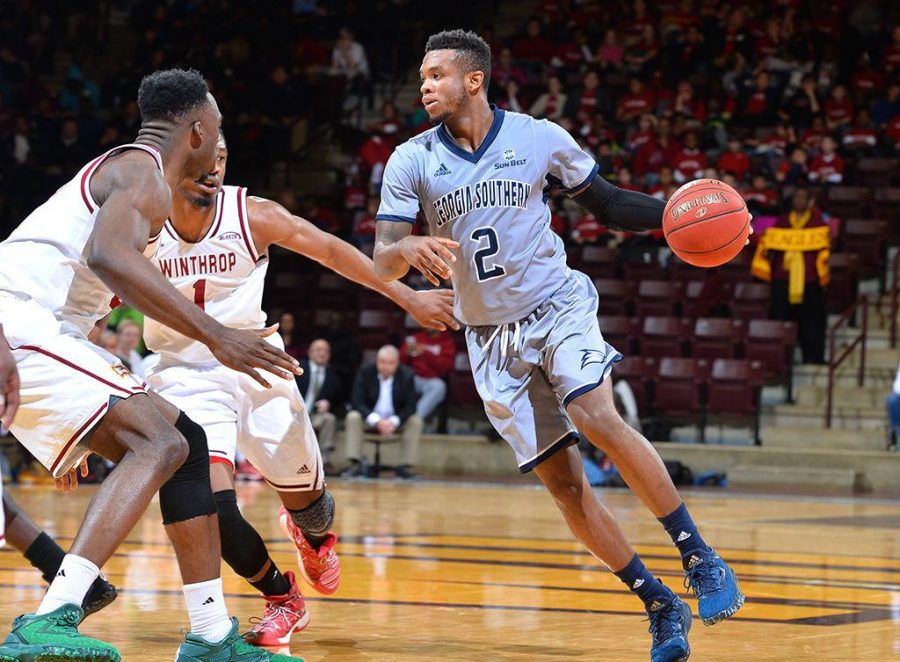 Update: On Friday it was announced that Georgia Southern will play an additional exhibition game at Augusta University on Nov. 3 at 7 p.m. Proceeds from ticket sales for the game will go to the American Red Cross in an effort to aid relief from recent hurricanes in Puerto Rico and the U.S. Virgin Islands, according to a GS Athletics statement.

With a Nov. 1 home exhibition against Georgia College upcoming, the Georgia Southern men’s basketball team is gearing up for the 2017-18 season with high expectations and a veteran-heavy roster.

Been there, done that

With all five starters from last season returning, the Eagles’ roster will feature five seniors and six juniors this season, in what head coach Mark Byington called the “culmination” of his recruiting classes at GS. The current seniors were Byington’s first recruiting class.

They include forwards B.J. Gladden and Coye Simmons along with guards Mike Hughes, Jake Allsmiller and Tione Jones.

“The last couple of years, we haven’t had seniors,” Byington said at the Tip-off Breakfast this week. “The last time we had a senior-laden squad, we were inches away from the NCAAs.”

Byington was referring to the 2014-15 season, when GS went 22-9 and lost to Georgia State in the Sun Belt Championship game, narrowly missing the postseason.

The juniors for GS carried the bulk of the scoring load last season, led by junior point guard Tookie Brown and scoring swingman Ike Smith. Smith averaged nearly 20 points per game last season to lead the Sun Belt Conference, while Brown was second in the conference with more than 17 per contest.

Last season, GS excelled in certain statistical categories while struggling in others.

The team led the Sun Belt Conference in 3-point percentage, hitting from downtown at a rate slightly more than 39 percent.

The two leading scorers for GS, Smith and Brown, made 61 3-pointers apiece. Allsmiller led the team in 3-point percentage at about 43 percent. GS made 9.2 3-pointers per game in 2016-17, good for No. 31 in the nation in that category.

Team rebounding was another story for the Eagles.

Their average rebound margin was 4.8 less than their opponents’, placing them at 317th in the country (out of 347 total teams) in that category. Smith was the leading rebounder on the team, grabbing 5.2 per game.

The recruitment of 7-foot-1-inch freshman center Tyshaun Crawford was an effort to improve rebounding both offensively and defensively.

In addition, the Eagles, despite a high-powered offense, shot merely 67 percent from the foul line, another area in which they were in the bottom third of the country statistically.

GS has something of a tune-up in the Georgia College exhibition on Nov. 1. The team will get to play in Hanner in a game that doesn’t count toward its record before going on the road to begin a difficult non-conference slate.

On Nov. 10, GS will play its first regular-season game at Wake Forest, an ACC team that went 19-14 and earned at at-large NCAA Tournament berth last season.

After that, the Eagles will host Cal State Bakersfield on Nov. 13. The Roadrunners made it all the way to the NIT semifinals last season, where they lost to Georgia Tech and finished at 25-10.