Opinion: GS Football in a state of sorrow 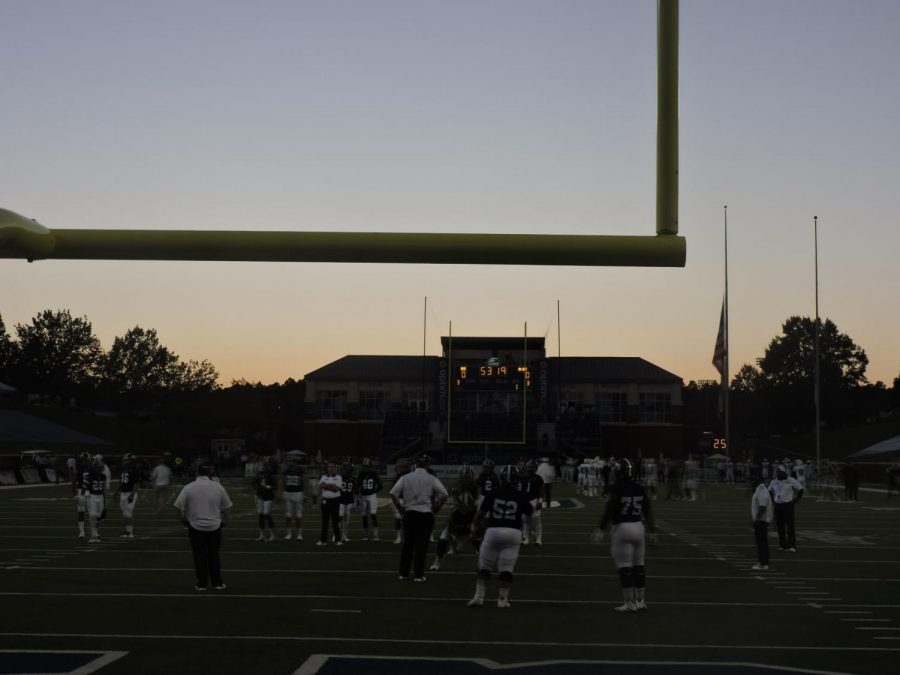 The Eagles prepare at Paulson Stadium for the Wednesday night game against Arkansas State.

When I decided to travel to Birmingham, Alabama to cover the first “home” game for the Eagles, I was expecting to write about a comfortable win over an FCS team, despite the change in location. What I experienced though was the first heartbreaking look into this travesty of season we’re only a quarter into.

Following the worst loss in school history, the internet attacks towards Tyson Summers and the team were hostile though respectable. Leaving Birmingham, I just knew that was the last time Summers would give a post-game press conference in a Georgia Southern hat.

Tyson Summers is now 5-9 at the helm with a game on the road at a very hot Indiana team. Tyson Summers’ days are numbered.

Fast forward to what seemed like forever, and you have a 1-2 Arkansas State coming to Paulson Stadium on a beautiful Wednesday night. I was on the sideline in pregame and seeing Tyson Summers walk around, talk to his men and look into the stands that were starting to fill up, there was without a doubt an insurmountable amount of both stress and anticipation. ESPN2 was here in Statesboro, GA and the student section was as full as I have ever seen it.

The team ran through the banner with flags flying, fire rising and a nervous aura for what this conference opener meant for both schools from the teams and the viewers. When the GS defense came up with a couple huge stops, I was prematurely optimistic for this game and figured that Sun Belt play was going to be different than the other 3 games so far.

At halftime, the Eagles were only down by 5, their smallest deficit of the season at the half. As the teams headed for their locker rooms, the classic “I believe that we will win” chants rang throughout the student section that was still strong, surprisingly. But that chant is never a good sign in my career of following sports.

It ended up being a terrible sign for the home team who went on to only score eight points and threw two interceptions and allowed three quick Red Wolves touchdowns in the last 30 minutes. Perhaps a good thing though is that the majority of Eagles fans didn’t witness the second Shai Werts interception as the stands were nearly empty. So empty, you could hear the quarterback hike the ball before hearing the ball hit the hands of the defender, sealing the fate of an 0-4 start.

I’m not going to lie and say I’ve been a Georgia Southern fan my whole life or that my whole family went here, but I have been following this team pretty intently the past two or three years. Part of the reason I chose to come to GS was for the rich tradition and success of the football team. Since I’ve been enrolled here, the six-time national champions are 5-11.

You can blame Summers, you can blame AD Tom Kleinlein, you can blame the players, but at the end of the day, this program is having the worst season in its’ history. They didn’t have a lead until Wednesday night and it only lasted 2 minutes and 39 seconds. There are quarterback and running back miscues leading to fumbles and a secondary that leaves receivers wide open.

There are articles and tweets across the internet talking about how bad this team is and how Summers and Kleinlein need to go. There is also a solemn wave that has settled in Statesboro. The pride for not only the football team but for the school itself has left. There’s constant negativity when talking about GS and it’s pensive.

There are 8 games left in the 2017 Georgia Southern football season. I am not predicting us to win all eight because that is just blasphemous, however winning 4 or 5 isn’t too wishful thinking. ESPN has us favored in the games against Georgia State and South Alabama, 2 of our 3 remaining home games. Winning those would be huge for the attitude of this program and community. Honestly, New Mexico State should be a win next week as well.

I’m not calling for a firing of Tyson Summers. I’m not calling for all of this team to be cut and start from scratch. I’m not even calling for us to #packpaulson. I am calling for the Statesboro community, GS students and all Eagle fans to step up and continue to support the Eagles on Saturdays (and that one Thursday game against App State) and to have hope. Cliché I know, but it’s important for the community, for the team and for everyone involved with “the Greatest Team in America.”