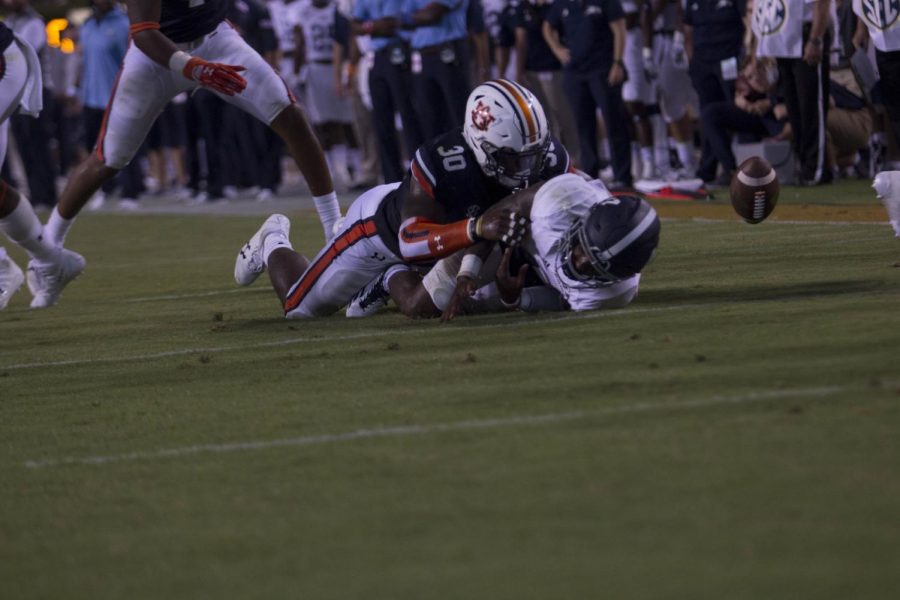 Shai Werts is taken down by Auburn linebacker Tre' Williams. Williams had 10 tackles to lead the Tigers.

It is easy to look disappointingly at the final score of Saturday night’s game, a 41-7 loss at Auburn, and be blind to some promising signals for Georgia Southern.

The offense was stagnant, yes, but context is crucial to that fact – including an experienced Auburn defense that is hungry to prove themselves as one of the best in the SEC.

Giving up 41 points makes a little more sense when you consider Auburn’s 25 first downs on offense to eight for the Eagles. The inability of the offense to budge Auburn’s defensive line translated directly to a worn out GS defense.

The pair tag-teamed the Eagles’ only touchdown at the end of the first quarter when DeLaRosa walloped Auburn quarterback Jarrett Sidham from behind as Stidham began his throwing motion, dislodging the ball to the turf for Reese to scoop and score 22 yards later.

Reese, junior Northwest Mississippi Community College transfer, was starting his first game for the Eagles, admitted after the game that he was new to “the interview thing,” meaning the flood of media surrounding athletes at FBS football games.

The 87,000-plus packed into Jordan-Hare Stadium was a novelty to him as well, but he played like a veteran with seven tackles and the team’s first touchdown of the season.

“It was like in slow motion, really,” Reese said of the fumble recovery.

The Eagles forced three turnovers and took over on Auburn’s side of the field each time, but only the Reese touchdown wound up putting points on the board.

The status of safety Joshua Moon is in question after he hobbled off in the first quarter. Head coach Tyson Summers will likely address this in a Monday press conference.

Even so, redshirt sophomore safety Jay Bowdry stepped up in Moon’s absence, leading the team with 12 tackles and a diving interception of Stidham.

Another player making his first FBS start was Shai Werts, the redshirt freshman quarterback for the Eagles. After not playing a game since 2015, Werts admitted to being jittery early, when he showed some nerves through fidgety feet in the face of the daunting Auburn pass rush.

With blood peeking through a gash below his nose, Werts said, “I’m good … I’m still the same guy.”

Despite his name, Werts is no introvert on the field.

He had 23 rushing attempts on the night for only 16 net yards, but importantly many of those rushes were really escapes from an Auburn defense in his face before he had time to think.

Once he settled in, he showed quickness and resolve, even when things weren’t going the Eagles’ way. He ripped of a 25-yard run at one point, but was hit in the backfield so many times it negated that chunk of yardage.

He did not make excuses after the game, showing maturity for a 19-year-old quarterback.

“Offense has got to do a better job executing,” Werts said. “We have to come out and capitalize, and we didn’t, and that’s on me.”

It was also on the Auburn defense, which sacked Werts five times and had 12 tackles for a loss.

Head coach Tyson Summers knew after the game that the bread-and-butter of his offense had hit a brick wall.

“We’ve got to be able to do what we came out to do, which is run the ball,” Summers said.

Despite the two primary running backs – junior Wesley Fields and senior L.A. Ramsby – both being stifled repeatedly by the Tigers, Summers said the Eagles would not stray from their identity.

“I really do think this is going to be a great learning opportunity for our offense, and for our backfield in particular,” Summers said. “I still think we’ve got a chance to be a very good offense this year.”

Summers said Auburn’s defense “played really well up front” and admitted the offense needed to find ways to get a push from its line. It was the second-fewest yards ever allowed in a game by an Auburn defense.

On Saturday, the New Hampshire Wildcats will infiltrate Paulson Stadium and Werts, Summers and company will have a chance to show the home crowd that the Auburn game allowed them to improve.

Kickoff is scheduled for 6 p.m. and will be the 2017 Military Appreciation game featuring discounts for active or retired members.

Eagle great Adrian Peterson will also be in town after being selected this year to the College Football Hall of Fame.