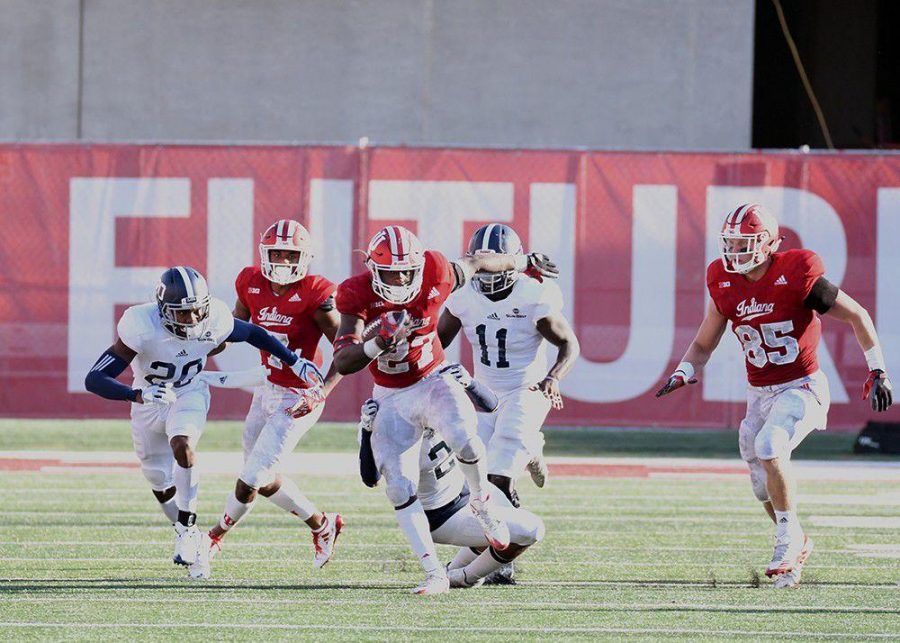 Georgia Southern fumbled five times and allowed Indiana 467 yards of total offense on the way to an 0-3 start to the season.

“We gave up way too many big plays,” head coach Tyson Summers said after the game. “I continue to believe that we’re going to get better each week.”

There were glimmers of productivity from the Eagle offense, but as in the Auburn game, they didn’t happen until GS had dug a big hole for itself.

GS struggled mightily on offense in the first half, allowing Indiana to go up 21-0 after the first quarter. The early Hoosier lead was highlighted by a 70-yard punt return touchdown by junior J-Shun Harris.

The Eagles began to run the ball more effectively than they have all season, especially senior running back L.A. Ramsby, who racked up 108 yards on 18 carries on the day.

However, the Hoosiers came out of halftime with two straight touchdowns, making the hole even deeper for Georgia Southern to dig out of (45-7 at one point).

The Eagles’ defense could not stop IU freshman running back Morgan Ellison, who in his first college start totaled 25 carries for 186 yards and two touchdowns.

With 9:38 left in the third quarter, Werts hit sophomore receiver D’Ondre Glenn for a 63-yard touchdown strike, the first career touchdown reception for Glenn. Glenn had three catches for 98 yards in the game.

For the third game in a row, though, the production came too little too late for the Eagles, as a late fumble – returned for a touchdown by Indiana to push the score to 52-17 – encapsulated the 0-3 start this GS team has experienced.

The Eagles could not overcome the blunders they consistently made in terms of penalties and turnovers. A whopping 13 penalties committed cost GS 108 yards and invaluable momentum. They fumbled five times and lost three of them, with one returned for a Hoosier touchdown.

“I thought they had an attitude of belief throughout the game,” Summers said of his team. “When we’ve got good things going on, we shoot ourselves in the foot, whether it’s a penalty, whether it’s a fumble, those kind of things.”

Summers, still under intense pressure from fans wanting him gone, took responsibility for some of the Eagles’ defensive woes. But anyone in the GS Twitterverse knows that fans’ patience has worn from thin to non-extistent over the course of the first three games. They want solutions, and they want results.

Positives for the Eagles included the performance of Ramsby, the first two touchdown passes by Werts, and the 242 net rushing yards the Eagles were able to gain against a solid Big Ten defense.

Still, there is no pretense of satisfaction amongst Eagle fans or, frankly, the team or the coaches. The body language of some of the players and coaches has shown growing frustration, and with the first 0-3 start in over two decades, the future of Tyson Summers is undoubtedly in more peril than ever before.