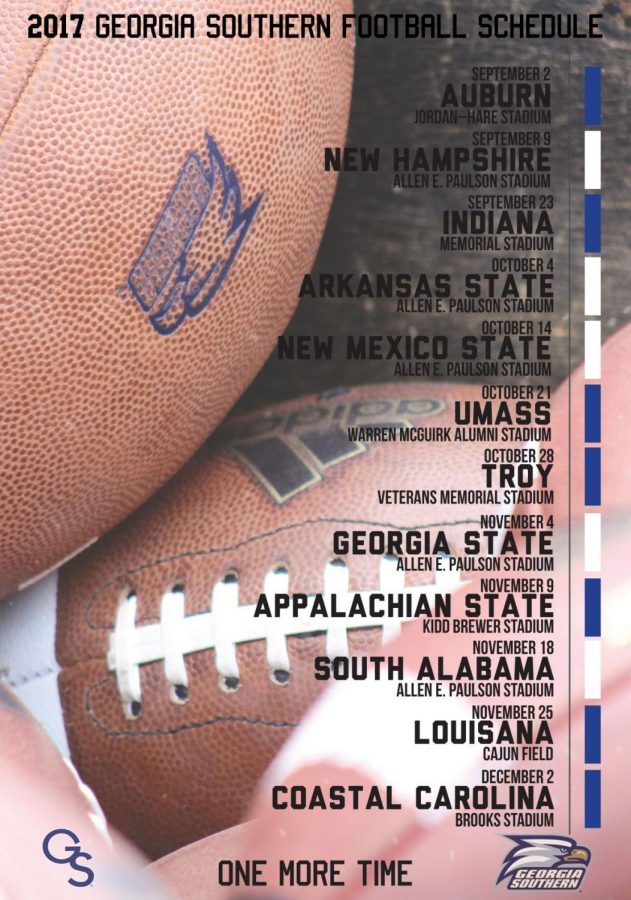 This season looks like it is going to end up being a solid season for the Eagles, but I wanted to give my final thoughts on where I think the team ends up. I think a best case scenario for Georgia Southern is a 10-2 season and the worst case is a 6-6 season.

As incredible as it would be, I don’t see an upset coming in Auburn this weekend. They are the SEC and they do have a very threatening offense. They’re also quick on their defensive line which could make it very difficult for GS to get into any flow with the run game.

The other loss in the best case season is unfortunately on the road November 9th against who else but the hated Appalachian State. Now, don’t hate me, but I’m buying the Mountaineers having a great season. They return a ton of talent from last year’s 10-3, overtime to Tennessee, Cramton Bowl winning team.

I have them beating UGA to start off the season and I have them possibly being an at-large team for a New Year’s bowl game. So no, I don’t think GSU goes into Boone on a Thursday night and steals a win.

But in this best case, I see how the Eagles could basically walk through the other 10 games. Unfortunately, there is that worst case 6-6. In this season I’m also giving Indiana, Arkansas State, Troy and Louisiana Lafayette the win.

Indiana hung around with the number two team in the nation for a full half and their defense is a weird thing that an inexperienced offense will struggle to find success against.

Arkansas State the past two seasons has turned it on against not only Georgia Southern but against the Sun Belt.

In non-conference games since 2015, the Red Wolves are 2-8. Against Sun Belt teams, they’re 15-1. Truly incredible the success in conference they’ve acquired. A midweek matchup could prove deadly for the Eagles as it did last year.

Troy is going to be hungry for revenge after we ruined their Sun Belt champions hopes in the last week of the season. This game will be the Trojans homecoming game and I predict that the Eagles will be focused on the following week’s in-state game against Georgia State.

The final loss of the season for Georgia Southern could happen in Lafayette, Lousiana against the Ragin Cajuns. Eagle nation will remember them coming to Paulson and spoiling our homecoming weekend on a Thursday night with a seemingly easy win. With their defense completely reloaded, the Ragin Cajuns could be spoiler of what otherwise would be a great season.

Hopefully, the Eagles will take advantage of the free wins against New Hampshire and UMASS. New Mexico State should also be a win for us as they consistently are a bad team and on paper I see no reason to think that this year will be any different for the Miners.

I pray that we finally beat Georgia State this season. The Eagles have lost to the fake GSU back to back years and if they lose again this year, I see Tyson Summers and AD Tom Kleinlein being let go. South Alabama and Coastal Carolina should be two competitive conference wins towards the end of the season.

I don’t think there’s any way this year’s team will go without a bowl game. It won’t happen again and can’t happen again. I’m excited for this new era and new season for Georgia Southern football and I hope my prediction of them losing to Auburn is wrong.