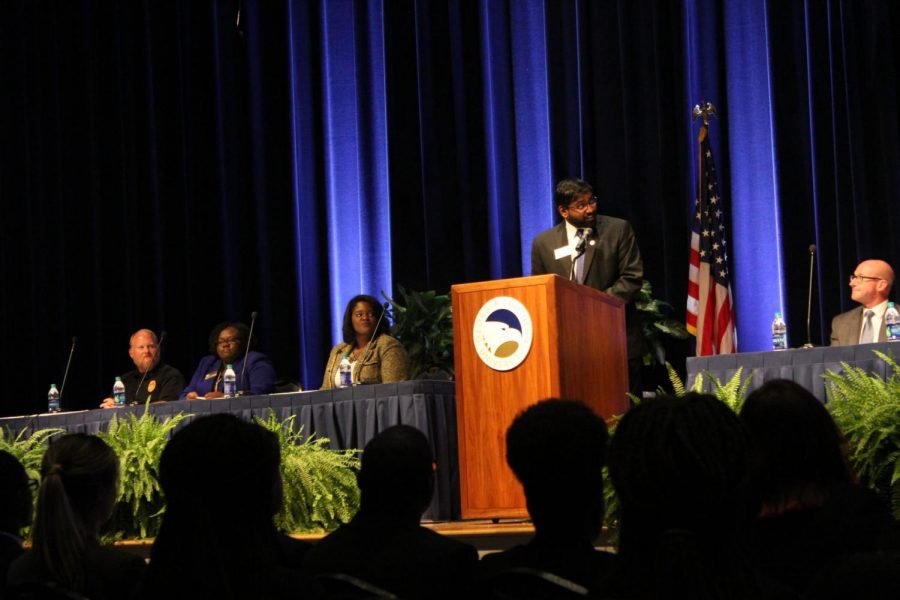 Student Government Association hosted the annual state of the university last night along with President Jaimie Hebert and his cabinet to discuss recent happenings in Armstrong consolidation, financial aid and the university’s revised schedule.

The night opened with introductions and role-call of SGA senators, who stood and recited the oath that is pledged at every SGA meeting to their organization, and to our university.

Hebert stepped up to the podium to deliver the state of the University address, which consisted heavily of news on Armstrong consolidation, and the future of our “new” university.

“While we’re still finalizing the new Georgia Southern University perspectives, I can tell you, it’s been a long journey,” President Hebert said, “There’s also been some fear, some anxiety and some uncertainty that so often accompany changes like this.”

Ninety-three operational working groups, or subcommittees, were implemented that looked at every area of the university and made recommendations to the consolidation implementation committee about specific consolidation plans.

“We had tremendous input in this process from all aspects of the university,” Hebert said.

Over 500 recommendations have been made by these subcommittees.

The new University will officially begin in January of 2018.

As Hebert stepped down from the podium leaving the audience on a high-note from what was a mostly inspirational speech, Amy Ballagh, Ph.D. Vice President of student affairs and enrollment management, stepped up to talk about a seemingly more serious topic, financial aid.

“Since I have the podium, I’m going to go ahead and answer a question that I know you’re going to have tonight, just to give you more of an idea as to what’s happening with financial aid,” Ballagh said, “ As you are probably aware some students experienced longer wait times than usual at the beginning of this semester.”

Ballagh said that while some students had problems, the majority of students did not, because they were “able to submit their financial aid information in a timely manner.”

The large amount of paperwork and applications that were received by the university in a short amount of time led to the longer processing time.

“Please keep in mind, financial aid is not a speedy process,” Ballagh said.

About one third of financial aid applicants are selected for random audits and according to Ballagh, four out of five of those applications audited had errors. This fall over 4,100 students had to be verified through this process.

“This is why it is so important for you to apply for financial aid as soon as the application is available, and to quickly respond to financial aid when additional information is requested,” Ballagh said.

The fafsa application for next year becomes available in October of this year. Ballagh advises students to complete the forms as soon as possible.

All of the class hours that were missed during the week-long cancellation of class due to hurricane Irma are required to be made up by the university. A revised academic plan was approved and emailed to students last night.

“The bulk of the classes, the Monday through Thursday, will be made up during the week of finals,” Diana Cone, Ph.D. Provost and vice president for academic affairs, said, “Instead of having the final exam schedule, we will hold regular scheduled classes at that time.”

Friday classes will be made up through online assignments or through having alternate exam schedules, according to Cone.

More information will be provided on the university’s revised schedule as it becomes available.