In case you missed it: Summer sports rundown 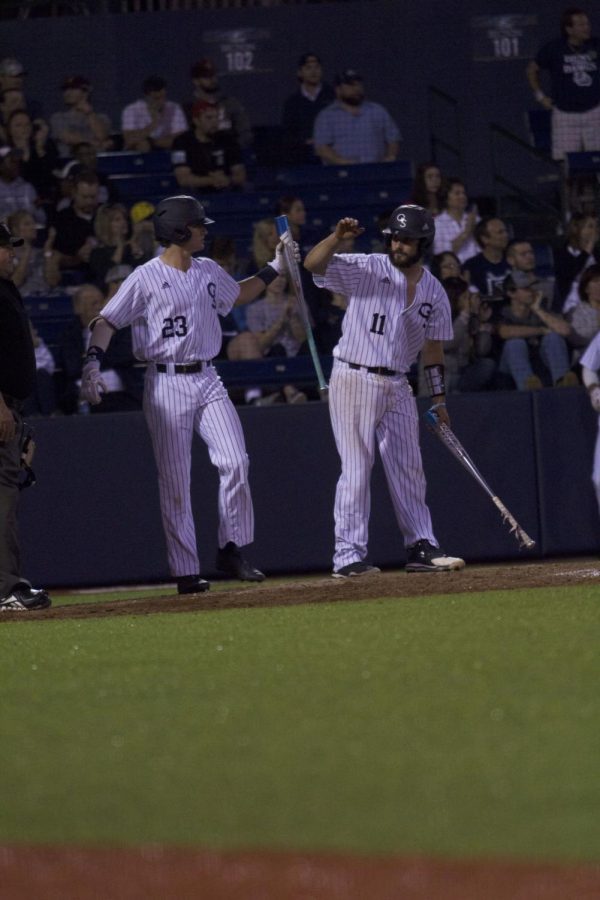 Senior Logan Baldwin and graduate C.J. Brazil celebrate after a run against UGA last season. Baldwin was drafted this summer by the San Francisco Giants.

In late May, the Sun Belt Conference baseball tournament was set to begin on the Eagles’ home field at J.I. Clements Stadium. However, summer showers persisted through the first two days and forced the tournament into a shortened, single-elimination format.

The scene here at J.I. Clements Stadium in Statesboro. A long way to being ready for Sun Belt Conference baseball Tournament. pic.twitter.com/qLxbzBsrSt

After the Eagles advanced to the final in thrilling fashion, they fell 7-6 at the hands of the talented South Alabama Jaguars. Read the full tournament recap here.

In the mid-June MLB draft, two Eagles were selected on day one and three more on day two. First off the board was fiery senior relief pitcher Landon Hughes.

Congrats to @landonhughes01 who was taken by his hometown @Braves today in the 7th round #HailSouthern pic.twitter.com/ZUEBgPpICk

They alleged that the university athletic department, athletic foundation, and coach Tyson Summers conspired to keep secret the fact that Dean and Gillespie’s original contracts were never signed and verified by the Board of Regents or the athletic foundation. The George-Anne broke down the lawsuits and the controversy here.

Shuman to focus on Baseball

Seth Shuman, who started a nationally televised game at quarterback for the Eagles last season, announced he would quit football to focus on baseball. The sophomore was a standout pitcher his first season on the mound in Statesboro, going 8-0 in his nine starts with a 3.34 ERA.

The Eagles are likely to return to a run-dominated option offense, making the speedier Shai Werts a more dynamic quarterback for the Eagles’ system. This potentially prompted Shuman to zone in on the baseball diamond rather than the football field.

Along with the game times and broadcast stations, the times for preseason practices and fan events were announced.

The season will feature a September 2 opener against SEC powerhouse Auburn and a ESPN2 Wednesday rematch against Arkansas State, which this year will be at Paulson Stadium.