Opinion: Is this the year the Sun Belt makes it to a New Year’s Six bowl? 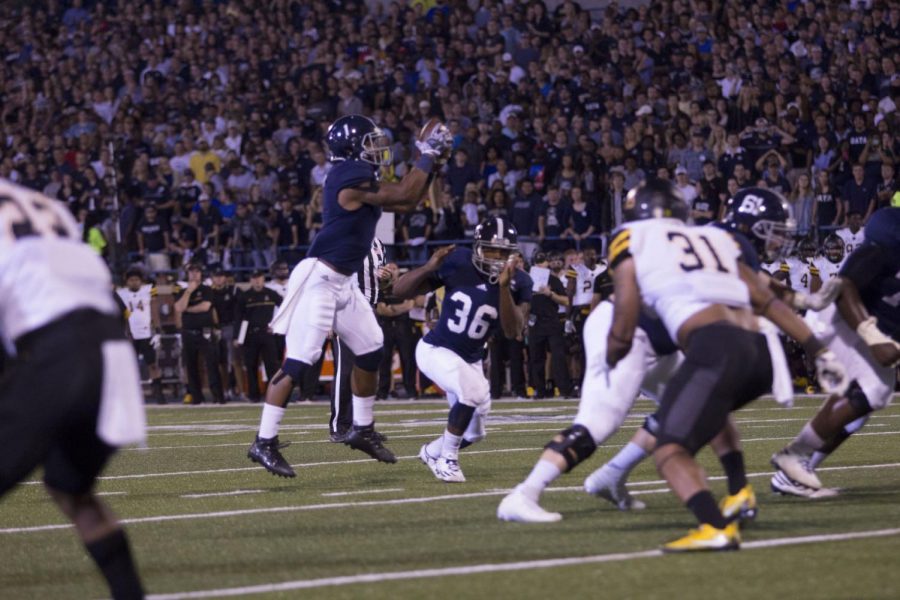 Redshirt senior running back L.A. Ramsby takes a direct snap against App. State last season. Ramsby will look to have a heavy influence on the ground game this year.

Following last year’s stellar postseason bowl performances, predicting the Sun Belt to be the best Group of Five conference this season would not be too brazen.

And that is the opinion I’m going to take. The conference posts one of the most difficult G5 schedules with five of the 12 teams opening the season against power-five schools.

The other four conferences in the Group of Five are the American Athletic Conference (AAC), the Mid-American Conference (MAC), Conference USA and the Mountain West.

Appalachian State travels to UGA to take on a Bulldog team that is still recovering from their home losses to Tennessee and Vanderbilt from last year. As much as it pains me to say it, this is a winnable season opener for the Mountaineers.

App State returns the majority of their 10-3 team with one of their losses being in overtime to Tennessee. There is a good reason the Sun Belt coaches poll had the Mountaineers finishing in first.

But App state aside, even teams that are projected to finish towards the bottom such as Louisiana Monroe have winnable non-conference games. While the Warhawks will struggle on the road at Florida State and Auburn, games against Southern Miss and on the road against AAC foe Memphis.

Though ULM had a pitiful 2016 season, these two games look like they could help make the Sun Belt look better against at least Conference USA and the AAC.

The AAC looks to be the one G5 conference that could compete with the Sun Belt this season. Memphis, with its conference-leading passer Riley Ferguson, Houston with its experience and stout defense, and Navy, which always has a respectable rushing attack, will all be tough teams to compete against. Above all, the predicted conference champion – South Florida – is going to be a beast of a team.

Between the high powered offense led by Heisman-hopeful quarterback Quinton Flowers and having, in my opinion, one of the nation’s best coaches in Charlie Strong at the helm, the Bulls from Tampa will be one of the teams trying to clinch that all-important bid to a New Year’s six bowl game.

And that is what it is all about. Of course it is always great to boast being one of the best conferences in college football, and these Group of Five teams are fighting for the opportunity to play in a New Year’s Six bowl.

With the inception of the College Football Playoff in 2014, the NCAA announced there would be six high-profile games played on New Year’s Eve or New Year’s Day. That means twelve teams play and one of those spots is reserved for the overall best Group of Five team.

In 2014, it was Boise State from the Mountain West Conference taking over the PAC-12’s Arizona. The 2015 postseason had a classic beat down of American Conference champion Houston running all over Florida State out of the ACC. Last year was the first year the Group of Five team lost as undefeated Western Michigan (who Georgia Southern hung around with last September) just couldn’t get anything done against the No. 8 Wisconsin Badgers.

In three years, three different conferences have represented the Group of Five. With the teams in the Sun Belt this season, don’t count out a Sun Belt team when the end of the regular season rolls around.