Kleinlein weighs in on consolidation, future 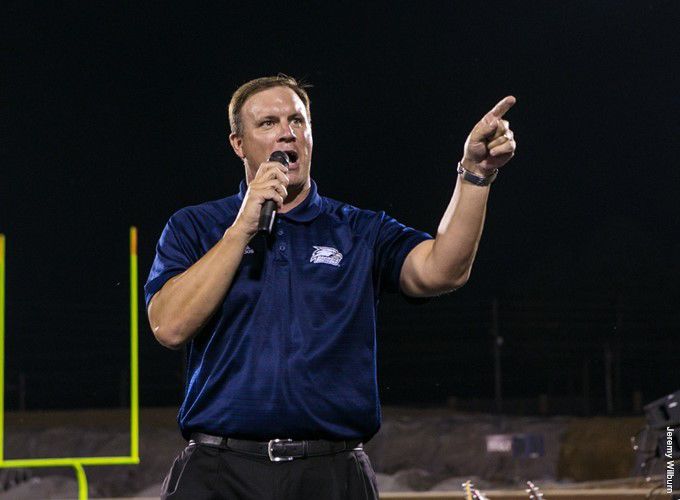 AD Tom Kleinlein speaks to fans at the Day One event last season.

After signing a four-year contract extension in May, Georgia Southern athletic director Tom Kleinlein sat down with The George-Anne to discuss the consolidation with Armstrong State, his recent hires and the upcoming football season.

Recommendations have already been approved by the Board that included ending Armstrong State athletics after the Spring 2017 season, honoring Armstrong student-athletes’ scholarships and offering them immediate open-transfer status (so they don’t lose any eligibility).

“We needed to start with the student-athetes because they were the ones that were affected immediately,” Kleinlein said. “Next was the staff, which is the process we’re in now. Moving forward it’s going to be ‘what are we going to do with the facilities?'”

Kleinlein added that as it stands now, the new Georgia Southern would have two facilities for basically any sport that Armstrong State offered.

“Once this organizational chart gets passed, the next thing is ‘how do we utilize the facilities and combine the two campuses with the facilities that we have?'” Kleinlein said.

Another idea that Kleinlein hopes will draw Armstrong State students to the Statesboro campus by Fall 2017 is giving them access to Georgia Southern athletic events.

Additionally, transport will be provided to these students for “selected” athletic events. Selected, Kleinlein said, starts with football games.

“Hopefully those football games and being around that environment carries over to them coming to basketball games and some of our other events on campus as well.”

This summer, Kleinlein has hired four newcomers from the Armstrong State athletic department. His new deputy athletic director will be Lisa Sweany, who was the athletic director at Armstrong. He also hired Sean McCaffrey as women’s tennis head coach, Kim Dean as softball head coach and her assistant, Megen Conner.

Kleinlein stressed that none of them were hired strictly because of the consolidation, but rather that Georgia Southern “had openings within [our] athletic department” and Armstrong State, having just ended its athletic program, offered some talented and qualified candidates.

“The Armstrong athletic department was one that functioned at a very high level,” Kleinlein said. “The misnomer that’s out there is they were hired because of the consolidation.”

As for Sweany, Kleinlein said her duties – which began on July 1 – will allow him to travel more to represent and grow the athletic department in Savannah and elsewhere.

“Having somebody of Lisa’s skill set … allows me the flexibility to do some other things externally while she’s here running things internally,” Kleinlein said.

The coaches hired had successful resumes at Armstrong State as well. Dean, for example, led the Pirates softball program to the NCAA Division II National Championship last season. Seven of her batters hit over .300, all four starting pitchers had an ERA under 4.0 (two under 2.0) and their final record was 38-14.

Kleinlein didn’t dance around the fact that the football team had a down year in 2016.

“I’m really excited to see how our kids react to having to come back and prove to some people that the brand of Georgia Southern football that we saw last year is not typical of what we expect at Georgia Southern,” Kleinlein said. “We’re here to get back to doing what we used to do.”

He added, “success in FBS football is not defined by one season. It’s defined by consistency of being relevant in terms of national status.”

After going 5-7 and missing a bowl game, he said that the program has necessarily undergone a kind of mentality overhaul.

“It’s an understanding from our head football coach of getting back to the culture of Georgia Southern football, which is a run-oriented offense,” he said. “I would look at it as the three coaches that came in, the addition of the strength coach, the entire staff changes that were made were a shift to get back to where we all had the same identity. We were all thinking the same thing and talking the same language.”

The new strength and conditioning coach, Dwayne Chandler, and the return to a run-oriented option offense go hand-in-hand. Eagle football wants to go back to overpowering people, wearing down defenses and running the ball down opponents’ throats. And then, when the time is right, the quarterback might drop back and hit an Eagle receiver over top of the daydreaming defense. This is the brand of football to which Kleinlein spoke about returning.

Kleinlein expressed gratitude to President Jaimie Hebert for his new contract extension, which the Savannah Morning News reported as having an annual base salary of $265,000.

“You have very few opportunities in life to sit down with your boss and say, ‘tell me how you really feel about what’s going on,'” Kleinlein said.

“When your boss offers you a contract extension and is committed to having you here long-term, that gives you a sense that you’re going down the right path and what we’ve been trying to create here in this athletic department is the right direction in the eyes of the president, in the eyes of the athletic foundation and all the people that are involved in putting that contract together.”

Kleinlein, and much of the Georgia Southern community, will see a growing, changing athletic department as the consolidation progresses and the Sun Belt Conference gains media exposure.

With that in mind, Kleinlein said, “We need to keep focusing on our three main mantras, which are rings, diplomas and leaders.”