Both sides of the ball: Previewing the Eagles as Auburn game nears 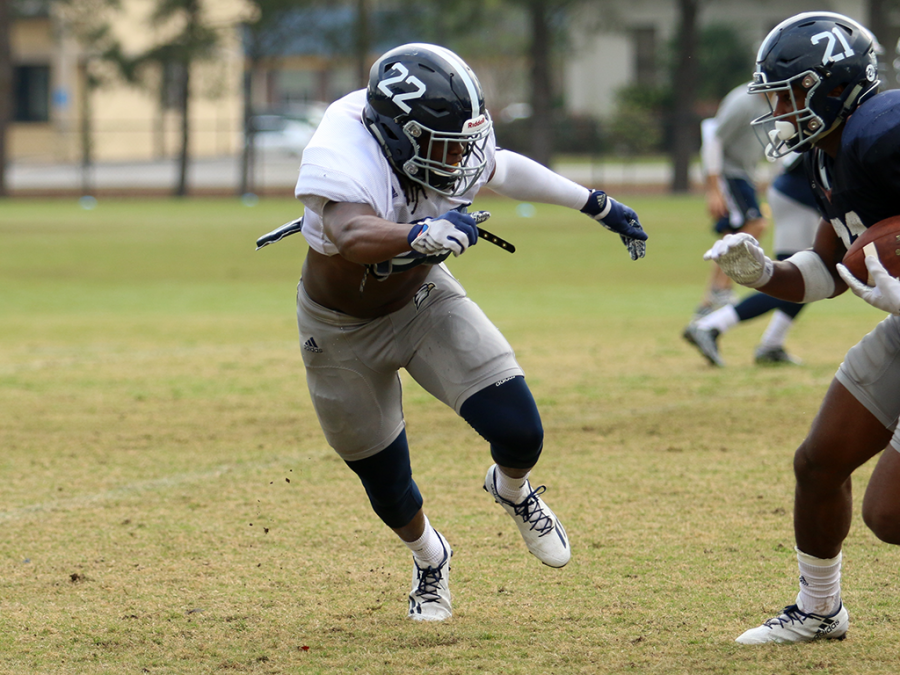 As head coach Tyson Summers released the first official two-deep depth chart of the season on Monday, the Eagles’ football roster came into its clearest focus since last December.

Auburn awaits, and Eagle Nation deserves insight into the team’s preparations on both sides of the ball before Saturday’s showdown.

Shai Werts will be making his first ever college start under center, but both Werts and Summers assured that the redshirt freshman would be able to lead the team Saturday.

Werts admitted that being the starting quarterback in the first game of the season hadn’t fully set in yet.

“I know coming out for pregame warm-ups, seeing all those people out there, it’ll sink in then,” Werts said.

Werts’ receivers expressed confidence in him as well, including senior Myles Campbell.

“I think Shai is going to be comfortable,” Campbell said. “Obviously, he’s the right guy for the job.”

There has been a great deal of rumor and now evidence from the scrimmages that the Eagles are transitioning back to the triple-option offense.

Since the team transitioned to the FBS, there hasn’t been a season where Georgia Southern has run the true, rhythmic, Erk Russell triple spread option offense. It has been basically a plethora of running plays with a few option plays infused.

In these first three scrimmages and throughout offseason practices, the offense has been looking like they’re sticking with it. Which is a good thing even though they do have one of the Sun Belt’s top receivers in Myles Campbell who finished with a team leading 4 touchdowns last season.

Summers stressed the importance of having a solid offensive line and said his o-line is “one of the groups and positions that has had the most drastic improvement.”

Losing top running back Matt Brieda to the NFL will make things look different in the backfield but veterans Wesley Fields and LA Ramsby are ready to take control as Summers reiterated that the two “have a ton of experience on the field”.

With Auburn on the docket, players had their own opinions on facing a team from the SEC. Running back Wesley Fields expressed that “SEC defenses are physical, big, and kind of shifty.”

The SEC continuously sends countless defensive beasts to the NFL and then reloads.

Auburn is arguably the weakest in the SEC West on the defensive side of the ball, however, which gives Werts confidence.

“People want to build the SEC up so much,” Werts said. “That’s not what we’re going to do. They put their pants on just how we put our pants on,” Werts said.

It will be a big task to take on this nationally ranked team, but it may come down to the offensive line and how effectively Werts distributes the ball.

On offense, Fields and Ramsby are expected to carry the rushing load, while the starting receivers announced were Campbell in the slot, along with junior Malik Henry and sophomore Obe Fortune on the outside.

Summers emphasized the speed of Auburn head coach Gus Malzahn’s offensive scheme, but he said it’s similar to styles they have played against in the recent past.

“They play faster than other teams,” Summers said. “Fast paced offenses are not necessarily something that are brand new.”

Although Auburn plays more uptempo than most teams, Summers said the Eagles have been preparing for fast offenses regardless, and that no fundamental changes were needed in this week of preparation.

“We’ve got to do a good job of focusing on us,” Summers said.

“If you’ve had an opportunity to watch coach [defensive coordinator Lorenzo Costantini] and our defensive coaches, you can see early on right at the beginning of practice each day just how fast the pace has been for those guys.”

He added that the key for his defense on Saturday would be “playing with our eyes and our fundamentals and playing as hard as anybody in the country.”

Junior free safety Josh Moon showed his confidence as a leader in the secondary. He acknowledged that the best defense against Auburn’s potent attack would be to keep them on the sidelines as much as possible.

“The more they’re on the field, the faster they’re going to go, and that just puts a lot of pressure on the defense,” Moon said. “We’ve got to hit them hard early, get them off the field so they don’t have the opportunity to tire us out.”

Moon added that he’s hoping Auburn challenges him and the secondary with throws from their quarterback, Jarrett Stidham. But he said he’s anxious to help stop the running game led by Tiger tailback Kamryn Pettway, describing it as “the opportunity to come up and make some tackles and help the front seven.”

Summers said that “three or four” of the safeties on the roster could start on any team in the Sun Belt Conference, but Moon is the unquestioned leader of the secondary.

Eagles will open season at Auburn on Saturday. Kickoff set for 7:30 p.m. ET.