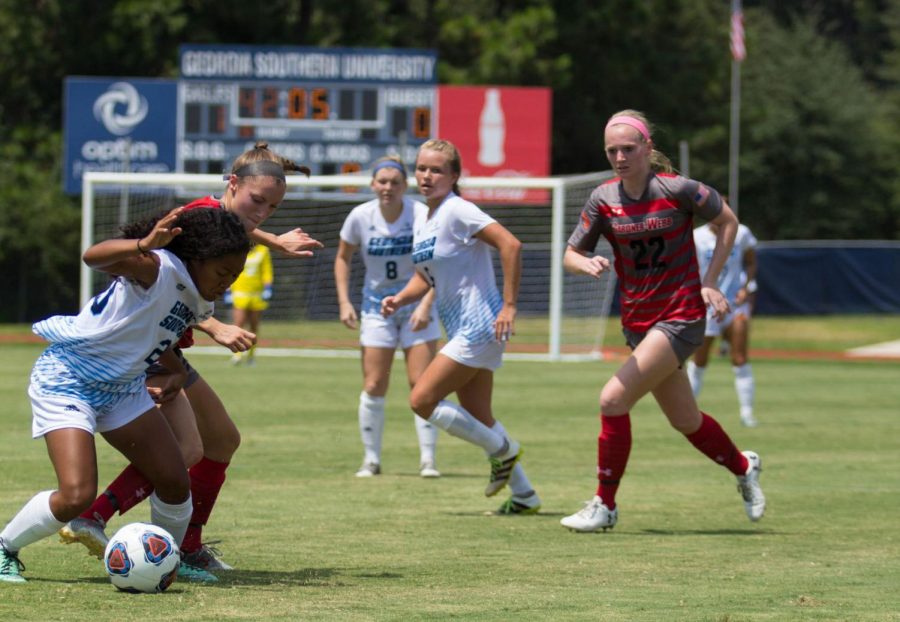 On a sweltering hot August Sunday, Georgia Southern’s women’s soccer team was able to grind out its first victory of the season, 1-0, over Big South Conference opponent Gardner-Webb.

After falling 3-0 to Florida Gulf Coast on Friday, the Eagles came out Sunday with a stronger performance against a weaker opponent.

It took both teams about 20 minutes to settle in and begin to have meaningful possessions. The Bulldogs of Gardner-Webb ended up having 13 team fouls. It was evident it was only their second test of the season as they were over-aggressive in challenges, which was good for the Eagles.

GS, though, wasn’t able to truly capitalize on many of the opportunities they had. The Eagles only had 6 shots on the afternoon, but 5 of them were on goal.

The lone goal of the game came in the 30th minute by way of GS sophomore Frida Brattum making the most of a scrum in front of the goal. Brattum, the Norwegian forward, rebounded her own shot and put it past Gardner-Webb goalkeeper Keely Brown from point blank range. It was Brattum and the Eagles’ first goal of the 2017 season.

The heat was certainly a large factor in the match in causing fatigue among players. As a result, there were frequent subs, especially in the second half.

“We had to really grind it out on a very hot day with limited subs,” GS head coach Brian Dunleavy told gseagles.com.

The defense for Georgia Southern was strong and rewarded sophomore goalkeeper Lauren Karinshak with her second career shutout.

The Eagles will travel to Macon next weekend for the Mercer tournament where they will play Kennesaw Stateon Friday, August 25 at 4 p.m. and Siena two days later at 1 p.m.