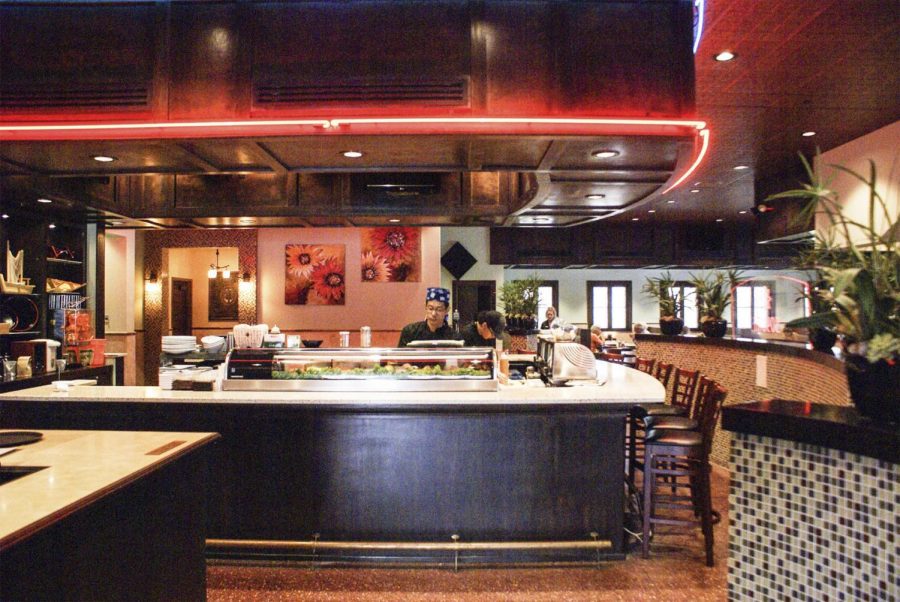 There is now another dining option in Statesboro for people who appreciate Asian cuisine or maybe just something different for a dinner date.

The George-Anne recently attended the new restaurant to get some perspective on what it could offer students and local residents.

Its name, “Soyumi,” is pronounced “so yummy,” Adam Tsang, the general manager, said.

There are three chefs at Soyumi, who together have 50 to 60 years of experience. This is part of why Soyumi can offer several different kinds of Asian cuisine, like Japanese, Thai and Chinese food, Tsang added.

He also explained how the restaurant is looking to put their unique twist on some American dishes.

“One of the examples of a dish we launched right now is sushi pizza. The bottom of the pizza is a fried rice cake, topped with [spicy seafood]…it doesn’t have the tomatoes or anything, but appearance wise, it’s something that’s familiar,” Tsang said.

Dishes like the sushi pizza are part of a larger effort to get people in Statesboro open to exploring different foods that they might not have eaten before, he said.

“Raw fish is something that sushi is very well connected with, but how do you get people who have never tried something like that to open their eyes and open their minds to what that food is?” he added.

Soyumi was relatively easy to find, as it was next to the intersection of Henry Boulevard and Brannen Street.

The parking was sufficient for the number of customers who had reservations, and if need be, there is also ample parking in front of the adjacent shopping center.

Once we sat down, I ordered a glass of green tea. Only two or three minutes passed, and the waitress brought out the tea. It had that dash of sweetness that less expensive green tea typically has, but it was not too sweet.

Later, she walked by our table and refilled our drinks- a couple of times, in fact. Luckily, the refills were free.

The appetizer, a plate of eight salmon rolls, was also delivered within five minutes of ordering it.

That made it easier to taste the flavor of the salmon. It had a fresh flavor which was surprisingly not very strong. After tasting the roll as is, it felt right to add some ginger and wasabi to it. One sliver of ginger or a dab of wasabi seemed to do the trick.

For those who have not tried ginger or wasabi, it might be better to add those toppings sparingly at first, as both ginger and wasabi have a strong, often accumulative taste.

The sushi were not completely gone when the waitstaff brought out my entree- pork curry katsu [katsu means “and”].

The main plate, which was large, had sections of crispy pork, steamed vegetables and a mound of white rice. A small bowl of curry was served to the side.

The curry itself had a surprising taste. This past summer, I went to Kyoto, Japan as part of a study abroad trip with other GS students. The amount of curry restaurants over there are like how burger joints are here.

Curry in Japan was viscous and had a deep brown hue. If you ordered it with enough spice, it could easily clear your sinuses.

In comparison, the curry served with the pork at Soyumi was a translucent orangish color. It had some kick to it, balanced by a tangy sweetness.

The curry actually tasted very similar to red Thai curry. While that medley of flavors ran counter to my expectations, it was quite enjoyable to eat.

The vegetables, which included broccoli, squash and carrots, were easy to chew without being too mushy or tough. They were imbued with some sort of peppered broth. It did at first seem like a mushroom-like flavor, but gave way to some other hint of flavor aside from the pepper

As for the rice, it had a sufficiently fluffy texture and just the right amount of stickiness. That made it easier to pick up with chopsticks and mix with bites of curry-covered pork.

The vegetables were alright to mix in with the meat and rice, but really seemed to taste better apart from them.

That entree was very filling, but as any dessert-lover knows, there is often a separate compartment, if you will, for dessert foods.

For now, the only dessert that Soyumi has on its menu is tempura cheesecake. Tempura is basically a crispy, fried layer of whatever the food inside is.

In this case, that fried layer tasted exactly like funnel cake. Inside, the cheesecake had a gooey consistency.

The accompanying strawberries slices added a tart flavor to the cake, while the drizzled chocolate added a sweeter taste to complement the plainer flavor of the inner cheesecake.

All in all, the drink, sushi, curry and cake (with the price for the cake split) cost $29.96. In comparison, a full meal at Olive Garden from appetizer to dessert will also cost you around the same amount.

My experience at Soyumi was a very positive one. I didn’t go into the restaurant with any specific expectations or anything. I just wanted to try out one of Statesboro’s new eateries.

Julia and I were greeted and seated rather quickly once we got inside. The decor had no particular theme, but it was pretty dim inside until we got to our table, which had plenty of lighting.

We were sat down with two menus and a sushi menu before we were left alone for a couple of moments. Before we could even inspect our menus, our server came by and asked us for our drinks.

I decided on fruit punch while Julia decided on iced green tea. Then, we were left alone again. It didn’t take long for me to be torn between Hibachi Chicken or Japanese ramen.

Julia was torn as well, but ultimately ended up pork curry katsu and salmon rolls while I got the Japanese ramen. The rolls got to us first.

I had never had sushi or anything resembling sushi before and was afraid that I wouldn’t like the taste. Luckily, this salmon roll was delicious. The rice was perfectly sticky, the salmon tasty and the seaweed satisfying.

It took all the self constraint I had not to just finish the salmon rolls right there, but I was eager for my main course. Once it arrived, I quickly dove in.

The Japanese ramen contained an egg, pieces of chicken, seaweed and more. Initially when you just ate the noodles by themselves, you didn’t feel quite full. Then, you got started on the egg and the chicken.

Once you began eating the protein, along with the broth and noodles, you quickly got full. I managed to eat just about all of my food and was satisfied with that.

Then our server asked did we want dessert. It took us all of three seconds to say yes.

Julia and I both split a tempura cheesecake topped with whipped cream and strawberries, which tasted a lot like funnel cake. The outside was sweet and crunchy, while the inside was filled with gooey cheesecake.

I’m not a big cheesecake fan, so I preoccupied myself with the tempera part of the dish. Soon Julia joined me, agreeing that the outside was better than the inside.

All in all, my experience at Soyumi was exactly what is says in the title: so yummy. I recommend this place to anybody looking for a new date night spot, Olive Garden-esque environment, or just going out for a night.

For those who may use GPS to find it, Soyumi Asian Kitchens full address is 727 Buckhead Dr. Statesboro, GA 30458.

Tsang explained that to-go service will become available in the next one or two weeks. The restaurant will start to serve alcohol after acquiring its alcohol license in early to mid-September.