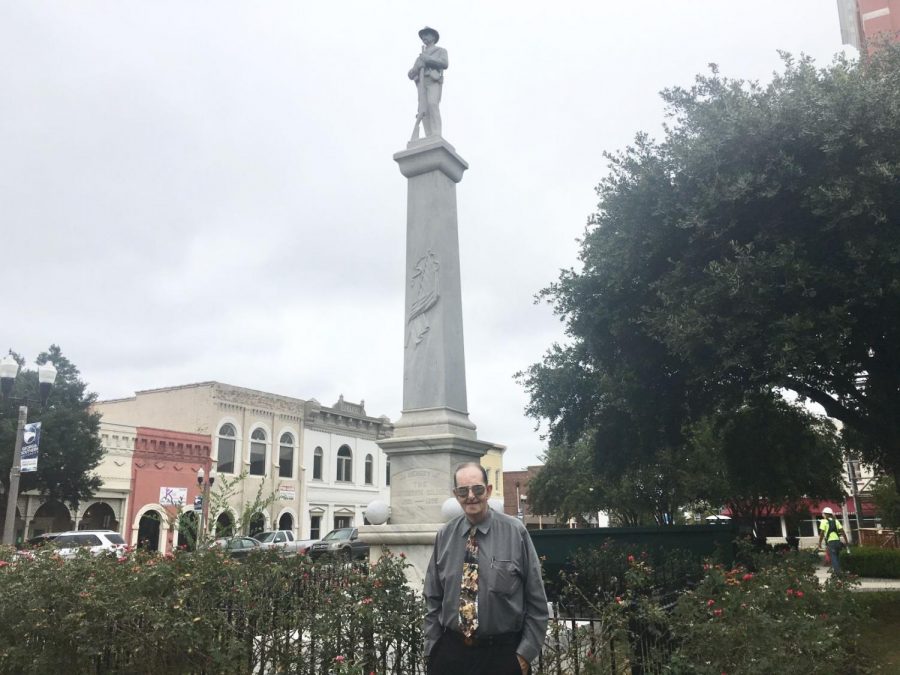 Michael Mull, commander of the Statesboro Sons of Confederate Veterans, standing in front of the Bulloch County Courthouse Confederate Monument.

Michael Mull, commander of the Statesboro Sons of Confederate Veterans, says he doesn’t put much “stock” in a recent petition calling for the removal of the Confederate monument at the Bulloch County Courthouse.

Mull, who is a descendant of a Confederate soldier, said anyone can sign the petition, even those who don’t have a vested interest in the statue’s removal. To demonstrate how unreliable the petition is, Mull said he signed it himself.

Mull feels the same way about the counter-petition, which has 2,246 signatures compared to the removal petition’s 1,608. Mull said he’s talked with local government leaders about both petitions, adding that they don’t put much “stock” in the petitions either.

The Statesboro Sons of Confederate Veterans has its own “real live” paper petition calling for the statue to remain erect, Mull said. He said he knows for certain the Bulloch County Board of Commissioners would take his petition more seriously than an online petition.

Concerning the current state of social and racial tension in the United States, Mull said he doesn’t see how removing the statue will change anything, nor does he understand “how a stone monolith has anything to do with oppressing anybody.”

“Removing it, [the statue], will certainly not remove any of the social ills that we have today,” he said. “There will not be a reduction in poverty among any group of people. It will not reduce the high school dropout rate.”

Mull questioned who would pay for the removal and also expressed concerns about amateurs removing the statue and possibly causing irreparable damage to it. The statue is made of Italian marble, which Mull says is highly fragile.

Mull also said that removing the statue would technically be illegal according to the Georgia Code 50-3-1, which states that no monument or memorial built on public property shall be “relocated, removed, concealed, obscured or altered in any fashion; provided, however, that appropriate measures for the preservation, protection and interpretation of such monuments or memorials shall not be prohibited.”

A proposal to remove the statue was previously denied by the Bulloch County Board of Commissioners in 2015.

“We are not a racist organization.”

Mull said he takes issue with being called a racist for wanting to keep the monument erect. He said the Sons of Confederate Veterans view the monument as part of their history, and that the claims of racism against his organization are false.

“We are not a racist organization,” he said. “We seek to honor the men who left their livelihood to go off and fight for Southern independence. We seek to defend history, heritage and honor. It hurts me considerably to have someone call us a racist organization or white supremacists, whenever they don’t know who we are and what we are about.”

How to learn more

Mull said the organization’s meetings, which take place the third Thursday of every month at RJ’s Grill, are open to anybody of any creed, color or background. He added that the Sons of Confederate Veterans do not ask people seeking membership about their race, origin or nationality.

Mull concluded by saying that his group is seriously misunderstood and that the problem they are facing is a “lack of complete understanding.” He stressed the group’s motto of “history, heritage and honor” and invited anyone who’s curious about the Sons of Confederate Veterans to attend their meetings.