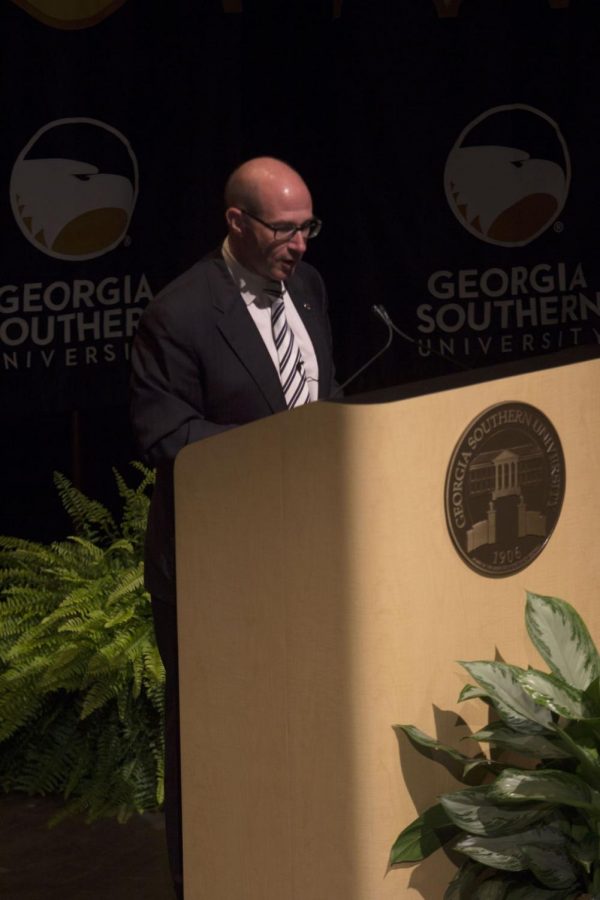 A large audience gathered in the Performing Arts Center to hear President Jaimie Hebert give the Fall 2017 convocation speech last Wednesday where he spoke of Georgia Southern University’s new additions, accomplishments and the consolidation process.

The address was titled “Setting the Pace for the Future” paying homage to one of the president’s favorite pass times, jogging. Hebert believes that institutions of higher education should pace themselves much like jogging.

“Running is really about pace,” Hebert said. “You really can’t sprint a 5K. If you did, you’d either seriously injure yourself or worse, fail to finish.”

The speech continued, stating gratitude of numerous achievements GS accomplished throughout the past year.

Hebert spoke of the new Military Science Building that completed construction on Jan. 9. It now houses GS’s ROTC programs. The university’s city campus is now home to to the veterans business outreach center, which provides support to veteran entrepreneurs.

Hebert gave an update on the progress of the new Interdisciplinary Academic Building located off the pedestrium saying that construction is “moving along very quickly and very nicely.” The building is scheduled to complete construction on April 2018 and open the following May.

“They are truly, truly, representatives of the tenacity that has existed in every person that has pushed this institution forward over the years,” Hebert said.

Hebert showed gratitude toward several online programs and traditional programs that were ranked among the nation’s best in US News and World Review this year.

GS’s school of nursing received a 1.3 million dollar grant, according to Hebert. This grant will go towards training nurse practitioners to provide health care at facilities in underserved and rural areas in and around Bulloch county.

The fully consolidated universities are said to have an economic impact of over 1 billion dollars. Hebert believes that this increase will lead to working “more closely with regional businesses and industry.”

Hebert foresees that GS is “headed for change,” but encourages everyone to “focus on our principles and embrace the opportunities that lie ahead.”

Hebert concluded the speech saying, “We’re going to set it [the bar] very high and we’re going to set a brisk pace and a steady pace for our university as we move into this next phase of our history.

A video of Hebert’s speech can be viewed here.