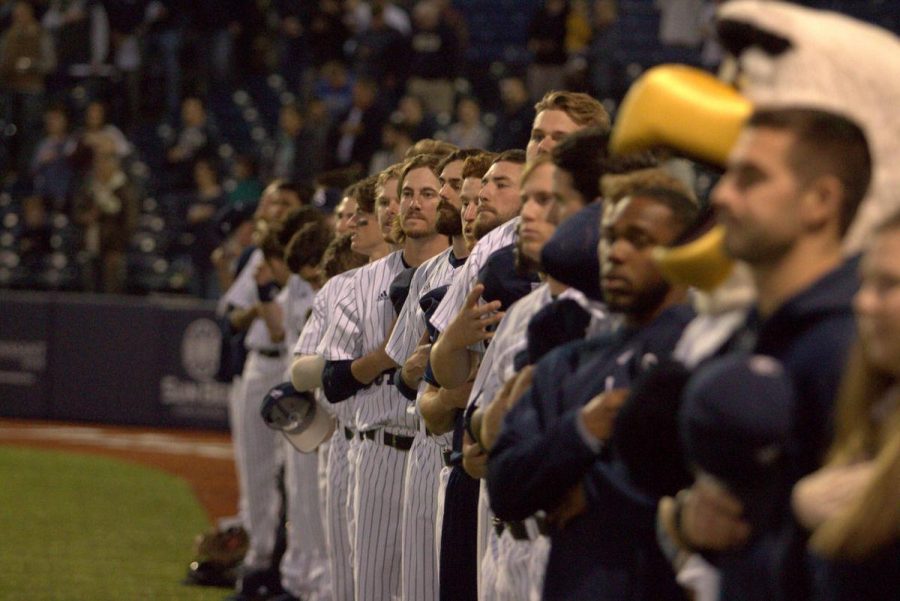 It looked like the Georgia Southern baseball team might drop their opening-round game at the Sun Belt tournament in Statesboro.

But after a miraculous 7-6 win over Louisiana in 11 innings and an 11-5 victory over Texas State, the Eagles found themselves in the Sun Belt championship game, where they forced extra innings but eventually lost, 7-6, to the South Alabama Jaguars.

Mid-week rain postponed games at the Sun Belt baseball tournament and later forced the tournament into a single-elimination format, making every game a win-or-go-home scenario.

On Friday, May 26, the No. 5 seed Eagles were trailing No. 4 Louisiana, 5-1, going into the ninth inning. Prospects were bleak for the tournament’s host.

In the ninth inning, GS senior shortstop Evan McDonald hit an RBI single with the bases loaded to earn a run back for GS. Two batters later, GS junior outfielder and tournament star Logan Baldwin blasted a dramatic grand slam over the right field wall to give Georgia Southern a 6-5 lead.

“It was the same team we played last year in the championship game,” Baldwin said in a press conference. “[The pitch] was a slider inside, and I stayed on it.”

The Ragin’ Cajuns tied the game in the bottom of the ninth and sent it to extras. GS senior outfielder Jordan Wren hit a go-ahead RBI double in the top of the 11th inning to drive home Baldwin, which turned out to be the winning run. Eagle nation went bananas. The dream of making an NCAA regional was alive.

GS had momentum going into Saturday’s matchup with No. 8 seed Texas State, and they propelled themselves to an 11-5 win with big offensive games from Baldwin, senior first baseman Ryan Cleveland, and sophomore DH Tyler Martin. The Eagles had a date with No. 3 seed South Alabama on their home field for the tournament title.

In front of a packed J.I. Clements Stadium, the Eagles and the Jaguars showed just how evenly matched they were.

South Alabama took a 3-0 lead into the sixth inning, when GS freshman second baseman Steven Curry slapped a single that drove in two runs, pulling the home team within one.

With the Jaguars leading 4-3 in the top of the ninth, Cleveland hammered a three-run homer to center field on a full count, giving the Eagles a 6-4 lead. Cleveland flipped his bat in the form of MLB star Jose Bautista before circling the bases to a raucous Clements crowd.

Not to be outdone, the Jaguars in the bottom of the ninth abruptly hit back-to-back solo home runs from sophomore outfielder Dylan Hardy and junior outfielder Eddie Papparella to tie the game, 6-6, and again force extra innings.

In the bottom of the tenth, South Alabama sophomore outfielder Brendan Donovan lined a single to left field, driving in Hardy in walk-off fashion and breaking the Eagles’ collective heart. The Jaguars won, 7-6, and earned an automatic berth to the Hattiesburg NCAA Regional.

“It was just a fantastic tournament,” South Alabama head coach Mark Calvi said. [The Sun Belt] made the best of a tough situation. What a fitting game. What a way to end a long week.”

Calvi complimented the Conference officials and Georgia Southern staff for adapting to the weather and running what turned out to be a thrilling tournament.

Hardy and Donovan also showed respect for the hosts along with the joy of being champions.

“They had a great crowd, and that’s a great ball club, Georgia Southern is,” Hardy said. “It was a great game from the first inning.”

Donovan said that after his walk-off hit, he couldn’t believe the game was over because it was so “long and exhausting.”

“I was just looking for something up that I could drive into the outfield,” Donovan said. “I got the barrel to it and as soon as I saw it go up into the air I knew we had a chance.”

Looking Ahead for GS

The Eagles will retain a number of productive players, but they will lose some star power in their batting order as well as on the pitching staff going into next spring. Cleveland (the team’s leading slugger)

Wren, McDonald and catcher C.J. Brazil will all be gone from the lineup. Starting pitchers Jacob Condra-Bogan and Evan Challenger will depart, along with relievers Anthony Paesano and flamethrower/emotional leader Landon Hughes. Two-sport freshman Seth Shuman will look to take a more leading role on the pitching staff while he steps into a possible starting quarterback spot on the football team.

The pitching staff will have to rebuild its core in order for the Eagles to return to the Sun Belt championship game. However, with the returns of Baldwin, Martin, Curry and freshmen Mason McWhorter and Mitchell Golden, GS is poised to have another powerful and efficient offensive attack in 2018.