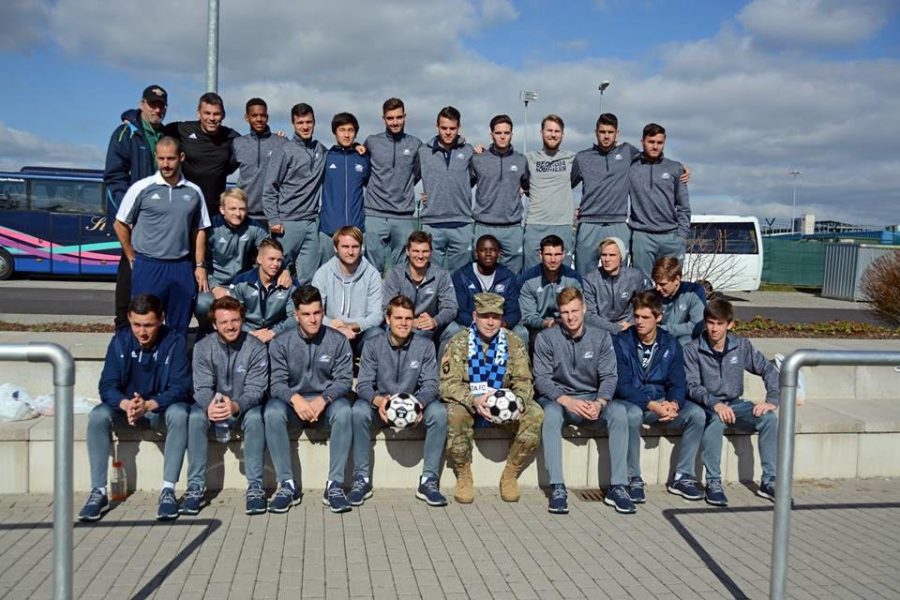 The men's soccer team with Lt. Gen. Ben Rogers on a US military base in Germany

What, exactly, do Statesboro and Hoffenheim, Germany have in common? If nothing else, they have both played host to the Georgia Southern men’s soccer team during the past month.

The Eagles took a trip to Germany while the student body was on spring break, and the experience highlighted the value of team travel and the the ability to connect cultures through sports.

The Eagles went 2-1 in Germany, with wins over two German U-23 professional teams, SV Waldhof Mannheim and Bammental FC. But first-year head men’s coach John Murphy spoke of the trip as beneficial to his team not only on the field but away from it.

Murphy said the team spent a day of the trip in Hoffenheim, a German town with population of just over 3,000 with a professional soccer club in the Bundesliga, Germany’s highest level of professional soccer. They privately viewed the Hoffenheim professional club’s practice and played against Hoffenheim’s U-23 team, which beat the Eagles 5-0.

“You’ll never play against a team as good as that Hoffenheim U-23 team,” Murphy said. “These guys are professional players. Particularly psychologically they’re very strong.”

But the high level of competition wasn’t the only source of growth for the team. Murphy described the experience with calm passion and Bostonian bluntness.

“Being understanding and empathetic of different cultures and different people, I think that’s the best thing about travel,” Murphy said.

He also discussed soccer clinics the team hosted for children of soldiers on United States military bases in Germany, sightseeing at a castle in Hoffenheim, and exploring the historic French city of Strasbourg.

The international element of Georgia Southern soccer did not begin with this trip. The men currently have six players with international backgrounds and the women have seven. In other words, soccer’s worldly wanderers travel both ways: away from the United States and to it.

Through the recruiting process, Iceland and Northern Ireland have converged on Statesboro. In fact, they have been here for three or four years, depending on which Georgia Southern soccer captain you choose.

Women’s captain and Northern Ireland native Alana McShane is a defender who transferred to Georgia Southern after one year at the University of Cincinnati. The freckle-faced senior speaks with a fantastic Irish accent that shows up more in some words than others.

“Traveling teaches you to be open-minded,” McShane said. “Being able to see the world provides an education that no type of school can give you.”

Her background as a youth player for Northern Ireland’s international club took her to an exhaustive list of countries, including Cyprus, Malta, Latvia, Germany, Iceland, England, Hungary, The Netherlands, Spain, Belgium, Sweden, Czech Republic, Bulgaria and Portugal. Ultimately, the United States and Statesboro.

The Georgia Southern men’s soccer captain, Icelandic senior Thor Sveinbjornsson, not only shares a name with a fictional superhero, but he also appreciates the gains that come to a team through travel. He said that traveling as a team “really makes you think how fortunate you are.”

Sveinbjornsson acknowledged the inevitable bonding that occurs on team trips like the men going to Germany, saying he “guarantees” that the men’s team is a closer group of friends after their Germany journey.

Angelica Wallerstedt, a Swedish junior on the women’s team, said she was recruited after an agency compiled a video of her play. She sent it to Georgia Southern among other universities in the United States, and eventually she chose Georgia Southern. She was the only player to start and appear in every game during the 2016 season.

Wallerstedt said she particularly enjoyed the Sun Belt tournament trip to Mobile, Alabama her freshman year, saying her life in the United States was “new and exciting.”

“I’ve always loved to travel and soccer has been a big part of letting me do that,” Wallerstedt said. “I wouldn’t be here if it wasn’t for soccer, so it has definitely affected my view on the world by allowing me to explore it.”

The international influence on Georgia Southern soccer comes from the diversity of the players and the willingness of coaches like John Murphy to discover new physical and psychological spaces with their teams. The trip to Germany exemplified how sports can, through travel, keep student-athletes engaged, empathic and energized.