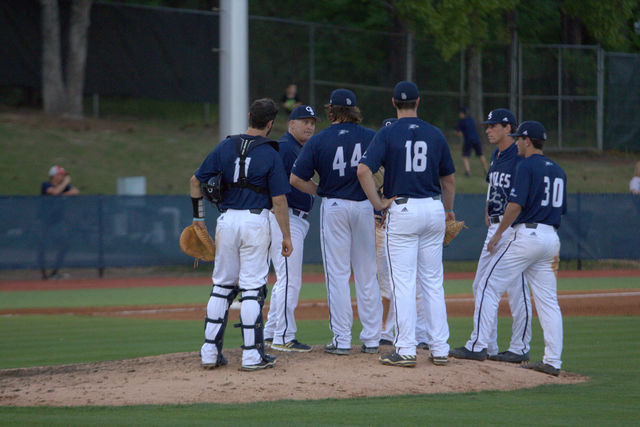 The Eagles are in action on the road this weekend with arguably their toughest series of the season when they take on the defending national champions.

The Chanticleers have regressed a bit this season from their stellar championship year last season, falling out of the top 25, but still having a pretty good season with a conference record of 10-4-1.

They have also been able to defend their home field in Conway pretty well, boasting a record of 15-8-1 and Spring Brooks Stadium.

Many Eagles come into this series off a nice performance last weekend against Appalachian State.

Freshman Mason McWhorter was able to go 3-3 in the final game against the Mountaineers, with sophomore Tyler Martin and senior Ryan Cleveland both recording their team leading fourth and eighth home runs of the season.

The weekend pitching staff has performed well recently, with senior Jacob Condra-Bogan standing at 4-0 on the season and pitching at least six innings in his past three starts.

The Chanticleers come in with a strong series win last weekend at Sun Belt powerhouse South Alabama. They were able to go down to Mobile and get the bats working, with some nice pitching performances to hold off the Jaguars in the first two games of the series.

This weekend series will be a hard fought battle for the Eagles, with game one beginning on Friday at 6 p.m., game two on Saturday at 2 p.m., and game three wrapping up the series on Sunday at 1 p.m.