Camping with a purpose: How one summer program engages local foster children 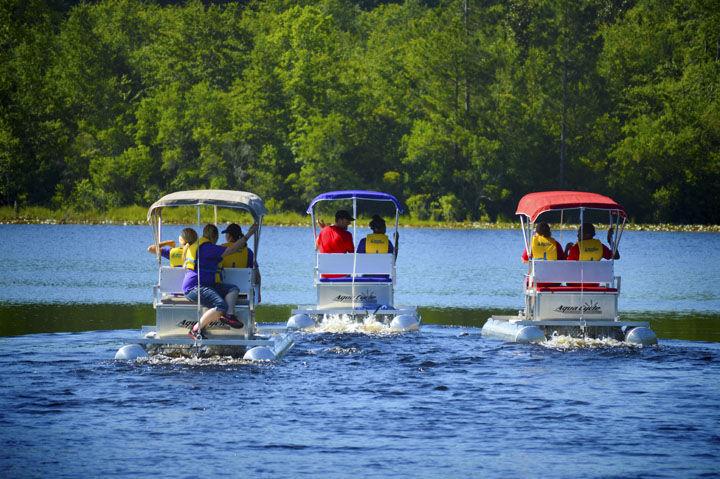 Many people do community service at some point during their lives. Jason Robichau and his wife, Robbie Robichau, started volunteering with TRAC, the faith-based summer camp for foster children.

Their simple effort to serve together grew into an initiative to bring TRAC to Statesboro, Georgia.

For them, it has been a long time coming to see their goals come to fruition.

TRAC, otherwise known as Teen Reach Adventure Camp, is a national organization that offers foster children ages 12 to 15 a summer camp experience. It is designed to show them a more positive outlook on life, and they may attend for up to four summers.

Before the Robichaus lived in Statesboro, they lived in Phoenix, Arizona. They began looking for a way to serve together and then contacted a friend of Jason’s who worked at the local TRAC camp there.

Jason said that the reason he and Robbie wanted to serve was deeply rooted in their faiths.

“I think as a Christian, the Bible calls you to serve and serve others, so that’s kind of what started it for Robbie and I,” Jason Robichau said. “Then [it was] hearing the kids’ stories and seeing the impact that TRAC has on these kids’ lives got us deeper into it, and then we just felt a calling from God.”

The couple started helping plan camps for that TRAC for six years, until 2013. They were inspired by their experience at the Phoenix camp to start another TRAC sometime in the future.

They did not know that their chances of starting another TRAC would improve once Robbie Robichau was hired at GS as a nonprofit management professor.

In the fall of 2014, Jason and Robbie were about to leave one of Statesboro’s First Friday nights downtown. They saw that the Fostering Bulloch director, Chris Yaughn, had an informational booth set up there.

At the booth, the Robichau’s explained their intentions of starting a TRAC in Statesboro to Yaughn.

He helped the couple then get their idea off the ground by assembling a group of 12 Fostering Bulloch volunteers who were interested in the camp. They pitched their idea to the group and got the approval to proceed with their plan.

The first in Georgia

According to teenreach.org, the Statesboro TRAC is the only TRAC in Georgia. It would have been more difficult for the Robichau’s to start the camp if they did not have the support of Fostering Bulloch.

“We didn’t know people [in Statesboro]…when you don’t know people, then it’s definitely harder for people to buy in,” Robbie Robichau said.

One of the people in that 12-person group was Maria Proctor, the owner of Madame Couture’s, a women’s formal clothing store. Proctor was so interested in Statesboro TRAC that she ended up becoming the director for the girls’ TRAC camp.

After much planning and preparation, TRAC Statesboro hosted one-day pilot programs for the boys’ and girls’ camps in the summer of 2015.

TRAC Statesboro could not host three-day programs that year, because the main camp organizers had to be trained by TRAC on a national level to be a part of it.

Jason Robichau, Proctor and Yaughn later went to receive that training. It covered topics including how to host the longer camps, raise funds and train volunteers.

During the training, the trio were able to observe operations at the Phoenix TRAC camp, as wella as camps in Nebraska and Texas.

TRAC camps do not operate exactly like other summer camps. One of the important aspects of it is that there is a one-to-one ratio of campers to volunteers.

Jason Robichau explained that it is structured this way at both camps to provide accountability for both children and the volunteers, since many of the foster children attending have experienced abuse in some form.

“The cabins need to be open concept so you can see every part of the cabin…that kind of stuff we have to be cognizant of,” Jason Robichau said.

The camp staff aims to be candid with camp attendees, as many of the attendees have trouble trusting others because of abandonment and experiences with abuse.

“We want them to take away that no matter where you’re at or your circumstance, that doesn’t define who you are,” Proctor said.

She said that many of the children are told during their childhoods that they are not or will not be able to accomplish goals of theirs or become the people they want to be.

“At least by us pouring into them, we can show them how much we truly love them and care about them and want to be there for them,” Proctor added.

Jason Robichau said that he hopes being there for the children positively impacts them.

“Some kids, right off the bat, I think it impacts [them] more and you can see the change…. We say even if you make a one-degree change in a kid’s life, over the span of that kid’s life, it could make a huge impact,” he added.

What makes a weekend at camp

Summer 2016 was the first year TRAC Statesboro hosted the weekend camps for teenage boys and girls. The programs took place at the Gordonia-Altamaha State Park in Reidsville, Georgia, about an hour away from Statesboro.

“TRAC is more intentional than other summer camps. All of the activities are geared toward an end result and build on each other,” Jason Robichau said.

Jason manages the boys’ camp, called the “All Star Program.” The camp’s message to each boy who attends is that they are special or unique in God’s eyes.

“Last year, they [the camp attendees] got to play football on the field [Paulson Stadium] with Georgia Southern staff…they got to wear real jerseys and the coaching staff brought them through the drills like a regular football team,” Jason Robichau said.

The children alternated between different activities, or stations. At some of these stations, they received new shoes and shorts, learned about self-control from a Christian practicer of karate and heard a Christian rap group talk and perform for them.

“It involves communication, feedback and active listening skills…a lot of the people [who do the challenge] learn by doing, then applying it to their lives, which is more important than me telling them the answer,” Robbie Robichau said.

The role of volunteers

Another part of making the camps run efficiently is gathering volunteers. At TRAC, volunteers are called cousins instead of counselors.

One of the only set requirements for volunteers is that they be Christians, due to the camp’s faith-based intent, Jason said.

Volunteers may help with actions ranging from taking photographs of the children, cooking food, helping the children fish, running miscellaneous errands and helping decorate for events.

Positions include one and multiple-day volunteering options. Those interested in volunteering may fill out a volunteering form online at www.tracstatesboro.com.

Jason wants to offer more camps to foster children and young adults in the future.

He and the others at TRAC Statesboro want to start a chapter of the Royal Families camp, which is affiliated with the TRAC camp. That camp would be for foster children ages six to 11-years-old.

They are also looking at starting life skills programs for young adults ages 16 to 21. Those programs will teach the camp attendees skills like saving money, buying a car or renting their own apartment.

However, TRAC requires a permanent facility to offer the extended programs. Currently, TRAC Statesboro has to pay $10,000 to rent out the Reidsville facilities for the camp programs.

Fostering Bulloch is meanwhile working on construction of a campground that would allow TRAC to use for the summer camp programs.

It may be a few years before the campground, called the Seventh Mile Farm, will be completed, as it comes with a $400,000 pricetag.

The facilities, which will be located on Highway 46 outside of Statesboro, will host TRAC and other camps and programs tailored to foster children.

Jason Robichau said, “There are about 8,000 foster kids in Georgia, so it [the campgrounds] would help us not only to grow our particular camp, but our vision in the future is to have more TRAC camps and more Royal Families camps.”