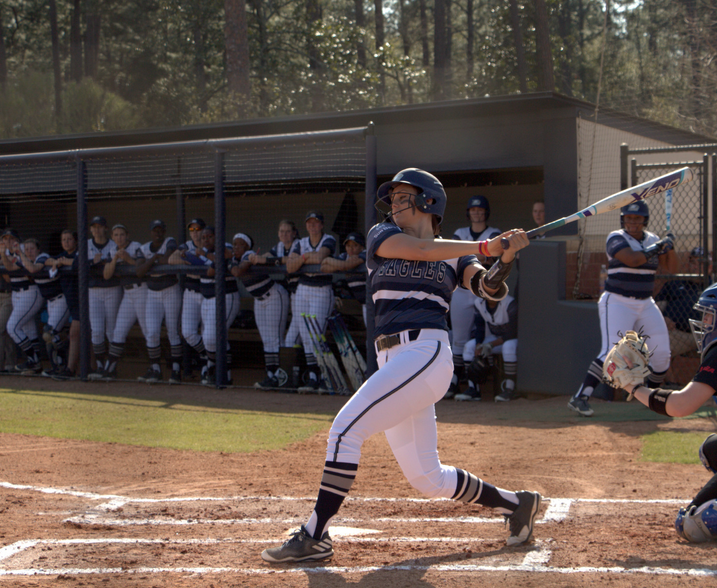 After last week’s sweep of Coastal Carolina, the Georgia Southern softball team carried its momentum all the way to North Carolina, where the team won all three games against arch rival Appalachian State.

Sophomore pitcher Dixie Raley had the start and allowed only one hit. Neither offense was very productive, so the game went to extra innings tied at zero.

In the top of the eighth, senior Emily Snider had herself another homerun, this time a two-run homerun, which were the only two runs of the game as Georgia Southern won 2-0.

Emily Snider continued her hot streak with an RBI single. Georgia Southern racked up another run in the third and fourth innings, making it 3-0.

App State kept the game close and manageable until the fifth inning, when senior Andrea McKenzie hit a grand slam, completely opening the game up.

The bleeding didn’t stop there for the Mountaineers as the Eagles plated three more runs in that inning, bringing the run rule into effect.

Junior pitcher Kierra Camp had one of her most impressive outings of the season, allowing only one run and three hits and earning three strikeouts.

Saturday’s game was a complete blowout in favor of the Eagles. Mekhia Freeman and Morgan Robinson continued their outstanding seasons, both scoring several times, including a three-run Robinson homerun in the third inning.

App State couldn’t slow down Georgia Southern nor produce any offense of their own. The Eagles won 11-2 in six innings, and Dixie Raley had another complete outing, allowing only four hits while striking out six.