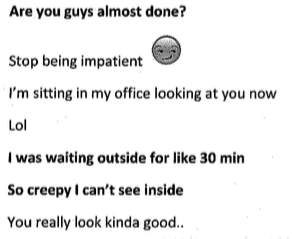 Screenshot of text messages in the Title IX report. The accuser is in bold, Dorsey is in regular text. This text message exchange took place April 14, 2016.

Dorsey was placed on administrative leave with pay on July 7 following the submission of an incident report to the Equal Opportunity & Title IX office on July 6, according to the Title IX report.

The Title IX office began to investigate the incident report. Following the conclusion of the investigation, the university terminated Dorsey for inappropriate conduct, including violation of university policies regarding harassment on Aug. 15, 2016.

This occurred after months of “ongoing text messages containing inappropriate jokes and references from April 2016 through July 2016,” according to the Title IX report.

On July 1, 2016, Dorsey allegedly sexually assaulted the accuser, who at the time was a Georgia Southern employee, according to documents received from the Bulloch County Clerk’s Office court documents.

In addition, an aggravated sexual battery count and rape count were no-billed after the grand jury failed to find enough evidence to charge Dorsey, per the court documents.

As of Monday, no court date has been set for the trial.

The following is the account of what occurred on July 1. All information presented here is from the Title IX report.

On July 1, 2016, Dorsey and the woman agreed to go out for drinks after a long day at work. They decided to meet at a local food establishment and have a couple of drinks, as friends, according to the accuser’s account in the Title IX report.

According to Dorsey’s account, after a couple of drinks, she agreed to let Dorsey drive her home instead of calling an Uber. According to her account of the event, Dorsey attempted to kiss her in her car, an act which she refused.

Dorsey then asked if he could use her bathroom to which she agreed. As Dorsey was in the bathroom, she sat down on her bed, according to Dorsey’s account. She said that she began to have flashes in which she saw Dorsey taking her pants off, giving her oral sex and penetrating her, according to the accuser’s account.

Dorsey, in his statement, denied that he had kissed her, rather that she had kissed him, twice. In addition, Dorsey said that after he exited the bathroom at her apartment, they sat on the bed and began to kiss each other. Dorsey said that he pulled down her pants and performed oral sex on her, according to his account of events on the Title IX report.

Dorsey stated that he called her name as he was performing the sexual act at that time but received no response, which caused him to end everything, he then covered her up and left, according to the Title IX report.

Relationship before the incident

Prior to the July 1 incident, Dorsey had texted her multiple comments that could be considered inappropriate that also violated the University’s harassment policy, according to the Title IX report.

Some text messages, included on the Title IX report, Dorsey sent to her included:

What turns you on? What makes you go!!” April 27“Hey wanna make out this weekend? Lol” June 22“When can I get you drunk and you pass out on me lol” June 27

Around April 26, Dorsey began to make efforts to hangout with her outside of work by texting her, “I’m serious about hanging out before you leave,” according to the Title IX report.

On April 26, Dorsey whispered, “you look so f***ing good today” in her ear, she said. She said didn’t feel threatened or worried about him at the time. That same day it was the first time they hung out and had drinks, according to her account.

Following those events, Dorsey suggested hooking up and becoming, as he stated in one text, “Friends with benefits..” in response to her text, “Yeah because we’re just friends,” according to text messages in the Title IX report.

On May 11, they hung out outside of work again and Dorsey began to ask more sex-related questions in person, according to her account in the Title IX report.

Dorsey suggested that they stay in a hotel out of town on different occasions, to which she always declined because she didn’t feel comfortable doing that, especially since Dorsey had a family. Dorsey said in a text message that, “I promise no one would find out unless you ran [sic] your mouth,” according to a text message on the Title IX report.

On July 1, she agreed to go out with Dorsey for drinks as friends, because she wanted to be have a working relationship with him.

Joel Wright, the director of the Title IX office at Georgia Southern, stated that when a sexual assault complaint is filed against a faculty or staff member, the Title IX Office follows the University System of Georgia’s (USG) sexual misconduct policy. It is similar to the process students follow, with only one difference.

“When it comes to the adjudication phase, instead of going to a hearing panel, the report is sent to the appropriate vice-president. If it’s of a faculty member, then it would be to the provost,” Wright said.

The Title IX office investigates a variety of issues relating to domestic violence, dating violence, sexual assault and stalking. Cases involving two GS students or a GS faculty member and student are investigated regardless of whether they occur on or off-campus, Wright stated.

According to the 2016 Clery Act report, there were four cases of sexual assault at Georgia Southern that were reported in 2015. National statistics show a different picture.

One in five women and one in 16 men are sexually assaulted while in college, according to the National Sexual Violence Resource Center. Wright feels that people are reporting more sexual assault cases because the process has become easier.

“We are seeing a trend to more reporting than less because our process is becoming more transparent. We are doing more education on how to report, where to report, what happens, so people are feeling more comfortable with reporting,” Wright said. “We see that as a good thing.”

Since the Title IX office simply investigates the cases for the university, they don’t have anything to do with the court proceedings if legal action is taking against the accused. At that point, the Title IX office will help, only if requested by the police or the court.

Keith Barber, Dorsey’s lawyer, said he could not comment because it is pending litigation.

Ian Leonard contributed to this report.