Growth is the game: a GS gaming organization achieves a major goal 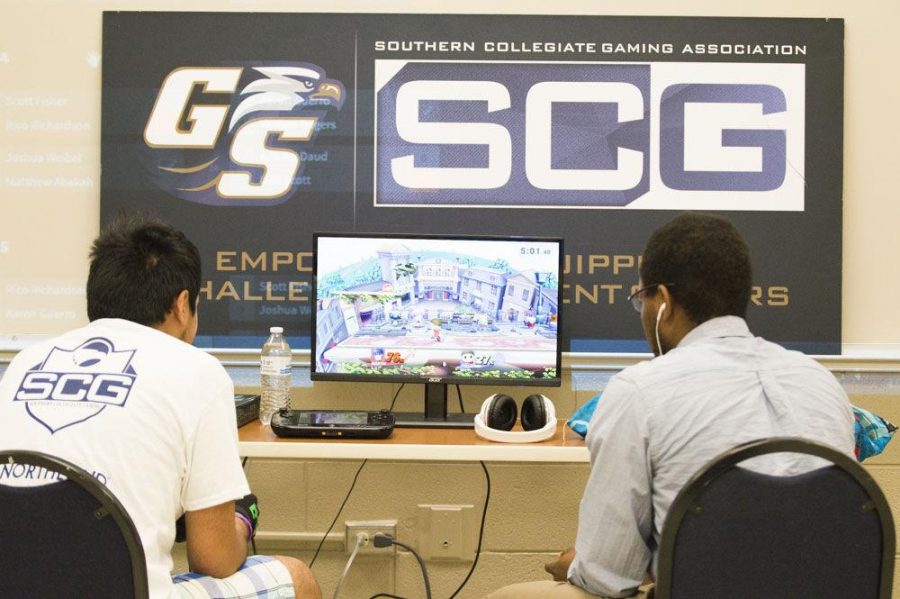 His stomach was churning with excitement. He felt a surge of emotion. This was it. All their hard work had led to this moment.

The gaming, or e-sports, organization, will now get a level of recognition and resources, like coaching and financing, that it could not acquire on its own.

The organization also offers several services for students beside the competitive gaming. It has casual gaming available for those who do not want to play competitively or are working toward that goal.

Additionally, SCG provides leadership and mentorship programs for students who want to lead and serve others and who want to have the counsel from an older adult.

“Anything that the students would want to do or try, we try to put it together so they can all go with people who have similar interests,” Williams said.

This accomplishment for SCG was a dream for Williams and other gamers back in 2012. The first group of students who started with the organization then have since graduated.

“Sending them a message saying ‘hey, you know what you guys were dreaming for, hoping for the program for other students, it’s a real thing now,” Williams said. “Having them celebrate, post things all over their Facebooks…it feels like we’ve really hit a milestone that we’ve been working towards.”

Getting SCG to become a club sport did not happen overnight. It took work on both Wiliams’ and the members’ parts.

A large part of what Williams believed helped SCG become a club sport were its initiatives to help students in need and the university’s willingness to collaborate in those efforts.

“First and foremost, we had to show the university that gamers exist [on campus] and gamers can make an impact,” Williams said.

SCG’s partnering with the university to host the Willie J. Burden Scholarship Tournament was the first step in showing they can make an impact.

“We saw an opportunity to partner with the university and impact a student’s life by setting up a scholarship foundation fund that a student can have,” Williams said.

He also felt that with the SCG hosting more events on campus and getting more people joining the group, put them in a good position to be recognized as a club sport.

Benefits of being a club sport

Williams explained that one of the biggest payoffs that SCG gets from being an official club sport is the credentials.

“Official recognition by the university goes a long way. There are companies that might not know about SCG as an organization, but they know Georgia Southern,” Williams said. “Once they hear that Georgia Southern now backs what we do…when a company sees that, they’re like ‘they have a university behind them’.”

Those factors will make technology-related and other companies more likely to want to invest in the SCG students.

Another significant change in SCG’s operations is that it will now get an official budget from the university.

“We’ve always been self-sustaining…we’ve been raising money for a long time to do what we do,” Williams said. “It [the recognition] makes this thing long. It gives us a lifetime.”

Mikey Henning, a senior computer science major and member of the League of Legends competitive team, shared how he thought the budget would impact him and the other SCG members.

“If people really don’t have that much money on trips, we have a budget now,” Henning said. “More people might be joining us since we’re the official e-sports team, so [it’s] more competition, since you’ll have to play for your spots. That pushes each of us all around to get better.”

As SCG grew, Williams saw that he and the organization board needed to hire an executive assistant to help with his increasing amount of responsibilities.

Williams said that the biggest challenge with that was figuring out how to pay someone for that position.

Fortunately, that was addressed when the university decided to make SCG an official club sport. Now, the executive assistant will be paid at least a stipend, though the particular details around that are still being decided.

“It [SCG becoming a club sport] made that position look so much more attractive, because it speaks of longevity…without the university backing, it’d be a lot harder,” Williams said.

The final candidate for the executive assistant job is Luke Panosian, a 2016 graduate of GS who majored in general studies with a focus on business management and communication arts.

Panosian and Williams worked together a few times while Panosian was still attending the university. They both worked in Chi Alpha, a local college ministry.

As well, Williams worked with Panosian during Panosian’s junior year because he was in ENACTUS, an entrepreneurial business organization on campus.

“We hosted an event last year called the Southern Classic, and I was the project manager for that. That was the first time Kevin and I teamed up to do something together,” Panosian said. “I was able to knock out a lot of the tasks he couldn’t get to, and I knew the industry [e-sports]…so I could know what I was talking about when players had questions.”

He elaborated on how this new job satisfies everything that he is looking for in a job.

“I still wanted to be in an industry that’s new, because I’m an entrepreneur, and anything that’s new and growing, I’m going to be eager to jump into,” Panosian said.

Panosian also wanted to live in a familiar place. Though he is from Atlanta, he wanted to return to Statesboro because of his familiarity with the town because of college.

“Also, [it’s] just Kevin himself, his leadership and the impact he has on the people he’s poured into has been pretty significant. I thought I could benefit from that as well, just from a mentorship perspective,” Panosian added.

Williams thinks that GS is becoming more known for e-sports now that the university is providing more resources to the SCG students.

He believes that continuing to educate the university will be very important.

“We would really like to make Statesboro the e-sports capital of the Southeast, and we could do it, too. We’re already ahead of the game,” Williams said. “There is not a school [college] in the Southeast that has the organization we do as far as e-sports is concerned…most schools look for us to help them develop our programs.”