A look into GS’s hiring process 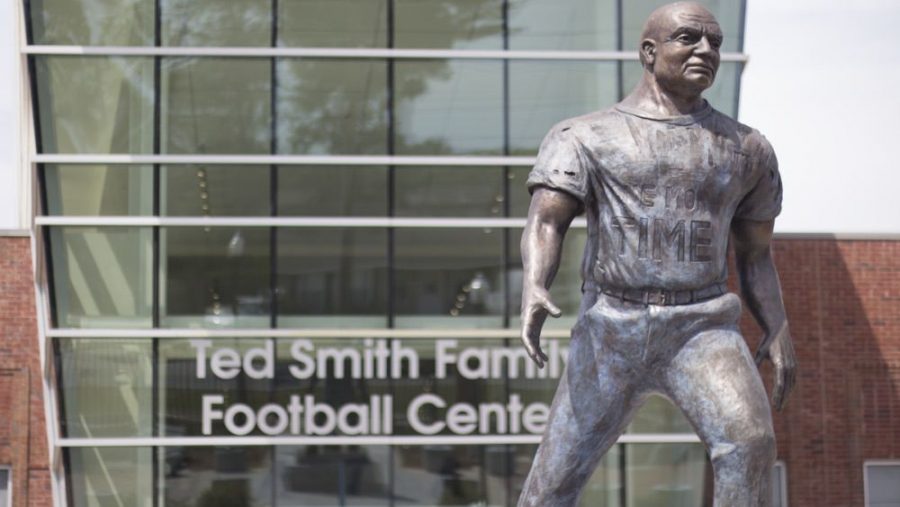 The Georgia Southern football team kicked off its annual Blue and White Spring football game at Paulson Stadium on Saturday, April 1. The Spring game is often the first chance many members of the public get the chance to see how many of the new recruits are progressing in the off-season, as well as the rest of the team.

The coaching staff has also added new members to its roster this past off-season. Most notably, former Georgia Tech quarterback and running back coach Bryan Cook joining the Eagles as offensive coordinator, replacing Rance Gillespie and David Dean.

In a similar fashion another vacancy was filled by GS this past January, as Dwayne Chandler took on the role of strength and conditioning coach, filling in for Tredell Dorsey.

Dorsey was hired in January of 2016 as a part of incoming football coach Tyson Summers’s new athletic staff, but was later dismissed after violating GS harassment policy, inappropriate conduct and is being accused of sexual assault by a fellow employee on July 1, according to a Title IX report.

In addition to the circumstances surrounding his dismissal, the manner in which Dorsey was hired has also raised some questions.

Within Dorsey’s personnel file is a copy of his official offer of employment, dated Jan. 4, 2016. In the letter, his starting date was labeled as Jan. 6.

Within the same file is a copy of his employment application dated Jan. 10, 2016 and a personal letter sent to Coach Summers expressing his interest in the strength and conditioning position, also dated Jan.10.

According to the documents provided in his personnel file, Dorsey began working at Georgia Southern a full four days before he had submitted an application, or expressed formal interest in the job. However, it would appear that Dorsey wasn’t the only one to follow this timeline.

Since January 2016 the Athletics Department, specifically the football program, has hired at least six other coaches before the candidate had submitted an application.

LaTravis Taylor, David Dean, Chris Foster, Joseph Mogridge, Dwayne Chandler and Bryan Cook all started their positions before filling out an application, according to their respective personnel files.

Despite the unusual order in which Dorsey and others were hired, Demetrius Bynes, Director of Employment Services, claimed that this was standard for most athletic departments around the country.

“Coaches are not hired in the same way that traditional staff are hired, just due to the nature of the business. We as well as most schools throughout this country do not simply post jobs and accept applicants for head coaching positions and other key coaching positions,” Bynes said.

Bynes went on to explain that when a coaching vacancy is realized, the athletics department is at full liberty to speak, meet with and receive materials from potential candidates, and once they’ve determined who they would like to hire, they contact Human Resources. After that, Human Resources begins the vetting process, and collects the necessary documentation, such as applications, cover letters and resumes.

Another staple of the hiring process here at GS is a background investigation.

Despite Bynes’s confidence in the way the Athletic Department conducts its hiring, this system seems to conflict with the hiring policies established by the University System of Georgia (USG).

“An application must be submitted for a posted vacancy via the employer’s published application process,” according to USG’s Human Resources website. “An employment application form shall be completed by each person formally applying for a staff or faculty position in a USG institution.”

Sonja Roberts, a communication specialist at USG, expanded on this policy in an e-mail interview.

“A candidate is not expected to begin work until all the requisite employment checks are completed,” Roberts said. “The candidate’s employment date will begin after the background and other steps are completed.”

Roberts continued to explain that USG institutions have the ability to include additional policies regarding hiring and recruitment, however she did state that no institution may add policies that would conflict with, or violate standing USG policies.

Non-coaching staff members seem to undergo a different process than their counterparts in the Athletic Department. Bynes described the process that these staff members go through as more rigid and deadline driven.

In the case of these positions, once there is a vacancy within a department, a notice must be sent to Human Resources to begin creating an online application which, once completed, must be posted on the website for a predetermined amount of time, and open to all applicants. Once that time passes however, the position is closed and no others may apply.

“The department and their supervisor is responsible for reviewing the applicants and determining who should be interviewed,” Bynes said. “They ask the candidate structured questions they document their responses and then they verify references and provide all of that documentation to human resources and identify who their finalist is, so we can review all of their documentation and approve their offer so they can make the verbal offer of employment.”

When a vacancy is created in a department, a search committee is formed to pursue potential candidates.

The department chair and the head of the search committee work together to create an ad for the vacancy, that is then posted on different job websites, as well as the department’s website.

“The search chair and I as department head we work together on the ad and the search committee often has consultation into the ad, and so then that is posted widely,” Dan Bauer, Ph.D, writing and linguistics department chair, said. “So when that ad is set up, search committee members may know people and they may send this ad to other people, but the solicitation is generally fairly minimal for faculty positions.”

According to Bauer, the application is open for a set period of time, and once closed, the search committee members review the candidates and decide who should be invited to campus for interviews.

In addition to interviews, the search committees coordinate teaching demonstrations and research demonstrations for the candidates to complete based on the position to which they are applying.

After assessing the candidates, the search committee turns the process over to the department chair.

“The search committee at Georgia Southern does not make a recommendation for hiring, they give a list to the department chair of who is acceptable and who is unacceptable of the finalists and so then it is actually up to the chair to make the hire,” Bauer said.

Athletic coaching appointments are generally met with a lot of attention and new additions are usually announced in press conferences or press releases.

With the addition of Cook this past January, GS chose to include the fact that Cook’s appointment was contingent on final approval from University Human Resources.

Athletic Director Tom Kleinlein could not be reached for comment.