Most Valuable Eagles: Selecting GS most outstanding athletes of 2016-2017 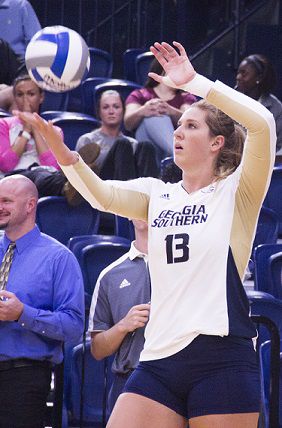 Here are our picks for each player most important to each team’s success throughout the 2016-2017 seasons.

Wilson led the Eagles with 8 goals and 18 points total, and he was named to the All-Sun Belt Conference First Team after his junior campaign in 2016. The forward from Tampa was also twice named the Sun Belt Conference Offensive Student-Athlete of the week.

Koo brought the kicking legacy back to Georgia Southern after a period where placekicking was a serious liability. He was a Third Team All-American, and a First Team All-Sun Belt performer, leading the team in points with 85.

Bange led the team in kills (336) and was second in assists and blocks. She averaged 2.71 kills per set to lead the Eagles.

The sophomore from Gainesville, Florida led the Sun Belt in scoring his sophomore year with 19.6 points per game. He and Tookie Brown comprised the highest-scoring duo in the conference and one of the highest in the country. Smith is a relentless attacker who will lead the Eagles along with Brown looking ahead to next year.

McGowan scored nearly 1500 points in her career at Georgia Southern, earning Second Team All-Sun Belt honors in her final season. McGowan was the only Eagle this season to average over 30 minutes per game. She led the Eagles with 15.8 points per game.

Alcala played in the No. 1 singles slot for most of the season, recording a 9-9 record against each team’s top individual. He and junior Eddie Landin also recorded 5 doubles wins. On March 10, he was name Sun Belt Player of the Week after a 4-0 weekend.

A versatile player who had success in both doubles and singles, the Argentinian will look to lead the Eagles for the next two years. She led the team in singles victories (from the No. 2 singles spot) with 12 and her and Ella Monsey led the charge in doubles, going 11-6 on the season.

Storey had an impressive average round of 71.5 that led the Sun Belt. He earned medalist honors at the Georgia Southern Individual Collegiate with two consecutive rounds of 67, and he has been competitive individually in tournaments all year.

Macioce notched an average score of just over 75 to lead the Eagles. She had a low round of 68, which was a school record, at Amelia Island in February. The sophomore from Phoenix will look to take the relatively new women’s golf program to new heights.

The versatile senior plays outfield and infield, and she’s a top-notch hitter. With a .393 average, she leads the Eagles and has started in all 43 games so far this season. She leads the team with 12 home runs, 35 RBIs and 53 hits so far.

McWhorter has made an immediate impact for the Georgia Southern program. He’s started 36 games as a freshman, maintaining a .444 on-base percentage and notching 48 hits, including 9 doubles so far this season. He also has 4 homers and 21 RBIs.