Offense explodes for the Eagles in Georgia Southern’s spring game 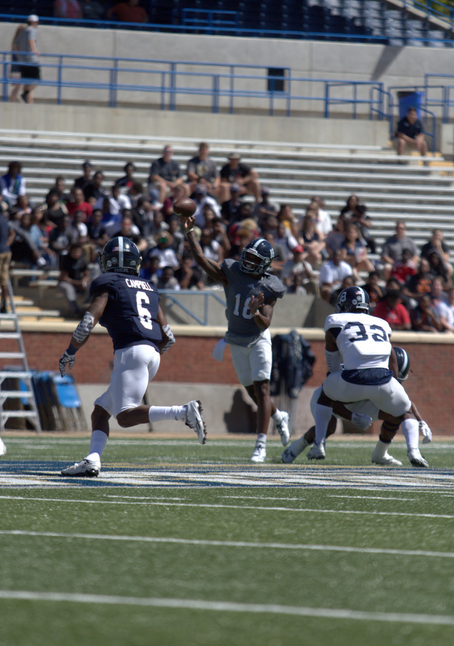 On Saturday, Georgia Southern participated in their blue and white Spring football scrimmage. Redshirt freshman Shai Werts rushed for nearly 100 yards as the Eagles offense put up five touchdowns. The scrimmage consisted of 100 plays in two periods at Paulson Stadium.

The triple offense that Georgia Southern fans are so accustomed to seeing was back in full effect. GS limited the amount of vertical passing plays and stuck with a power running game that proved to be effective. In the second drive of the game, quarterback Labaron Anthony ran 27 yards for a touchdown.

One of the main concerns for the Eagles moving forward will be at the Quarterback spot. The competition at the QB position has intensified between Seth Shuman, Werts and Anthony with all of them having potential starter capabilities. Shuman was poised to be the heir to the QB throne for the Eagles, but the explosive offense by Werts has narrowed the gap tremendously. Werts finished the game with 98 yards on the ground and a touchdown.

Offensively, the Eagles ran for 371 yards to go along with their 98 passing yards. Redshirt senior Demarcus Godfrey led the way for all GS running backs rushing for 54 yards and scoring a touchdown in the scrimmage. The Eagles executed their offense under new offensive coordinator Bryan Cook, and it called for high praise by the defense.

“This offense is a lot harder to stop than last year’s running that triple,” senior linebacker Chris DeLaRosa said. “They were out there making cuts and making plays left and right. We need to do much better on defense.”

The defense of the Eagles had a solid performance as well, recovering two fumbles and recording two sacks. The secondary for GS did a fantastic job defending the deep ball. Aside from giving up a 49-yard pass, the defense had the rest of the passing game on lock recording three pass breakups.

“As today goes on what you are able to see what we wanted to get out of it,” head coach Tyson Summers said. “We wanted to get about 100 plays. Trying to be productive on both sides of the ball which is something I thought we were able to do. We were trying to find explosive plays by the offense and get a few tackles for losses by the defense.”

The Eagles have three more weeks of practice before their preseason camp at the end of July.