A season in review: Softball 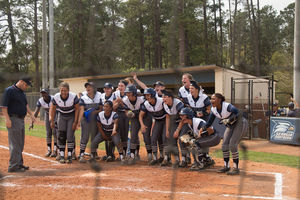 Preseason, if you would’ve told me the Georgia Southern softball team would be sitting in fourth place in the Sun Belt without pitching ace Dixie Raley having the greatest sophomore season, I would’ve doubted.

Yet, here we are with just two series left in the regular season and the softball team is in prime real estate to enter the Sun Belt tournament at the end of the season.

The team has gotten here in many ways, but the majority of success has come from the offense. Though as a team they are only hitting .268, it’s been Emily Snider and Mekhia Freeman who have come through as the offensive standouts.

Snider, who has the fifth best batting average in the Sun Belt (.382), has been a consistent clutch machine for the Eagles. She has hit a team leading 12 homeruns, or in her case, “Snidebombs,” and has 35 RBIs.

It’s hard to believe Freeman is only a freshman as she sits in 15th in conference with her .351 batting average. Freeman gets on base often and makes a big impact in the field as well.

Not as strong on the defensive side as senior first baseman Morgan Robinson, however, who has a .993 fielding percentage.

Back to Dixie Raley. She isn’t having a terrible or even a bad season, but with a 13-14 record, she’s certainly not going to be the Sun Belt sophomore of the year.

A big factor to this sophomore slump has been the high expectations put on her by both her team and herself. In a three-game series, Raley gets two of the starts, thus giving her more games.

With the schedule, the Eagles have done a good job. They’ve had two series sweeps, won two tournaments at the start of the season and have gone 6-3 on the road in conference.

If I were to give this season a grade thus far, I’d give it a B-. Not capitalizing on this past weekend’s series against Texas State looks like it may hurt the team down the stretch, and there was no real consistent strong pitching from Raley or senior Kierra Camp.

There’s still time for improvement, though, with a road series against a struggling South Alabama team and then ending the season at home against third-ranked and rival Georgia State.