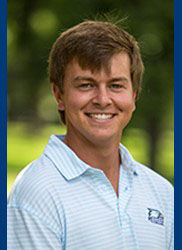 Brett Barron tied a school record with his round of 63 at Furman.

The Georgia Southern men’s golf team placed tied for third out of 21 teams at the Furman Intercollegiate this weekend.

Georgia Southern freshman Brett Barron shot a 9-under-par 63 in the first of three rounds in Greenville, South Carolina at the Furman University course. The 63 tied the school record for a single round of golf, making Barron the sixth Eagle to achieve the feat. The freshman from Suwannee, Georgia finished the tournament tied for fifth individually after shooting an even par 72 and a 2-over-par 74 in his final two rounds. Barron’s combined score for the event was 7-under-par.

Junior Jake Storey also had a strong showing for the Eagles, placing 13th overall after shooting a 3-under-par 69 in the first round of play, then going on to shoot a 71 and a 73 in the final two rounds. He finished with a 3-under-par mark for the tournament.

Georgia Southern sophomore Steven Fisk placed tied for 34th place overall with a combined score of 1-over-par for the tournament. Fisk shot 70 and 72 in the latter two rounds.

Clemson (-29) came in first place by 14 strokes in the team competition, and Clemson’s Carson Young won the individual title by one stroke with a final score of 11-under-par at Furman. Georgia Southern tied for third with Chattanooga after Clemson took first and USC-Aiken took second.

The Eagles have finished no lower than sixth place in any competition this spring season. They have placed in the top three in each of their last two competitions, with one to go before the Sun Belt Championship event.

According to golfstat.com, Georgia Southern has the best average team score per tournament in the Sun Belt conference at just over 287. It is hard to have Sun Belt golf standings when the teams only rarely and sporadically actually compete head-to-head before the Sun Belt Championship competition.

Golfstat.com lists Fisk as the No. 2 ranked individual golfer in the conference, Storey at No. 4 and GS junior Archer Price at No. 7.

The next event for Georgia Southern is the Gary Koch Invitational in Gastonia, North Carolina. The event will take place on Monday, April 10 and Tuesday, April 11.

The golf team will head to Destin, Florida for the Sun Belt Championship beginning on Sunday, April 23 and running through Wednesday, April 26.