Baseball Beats The Citadel on the Road 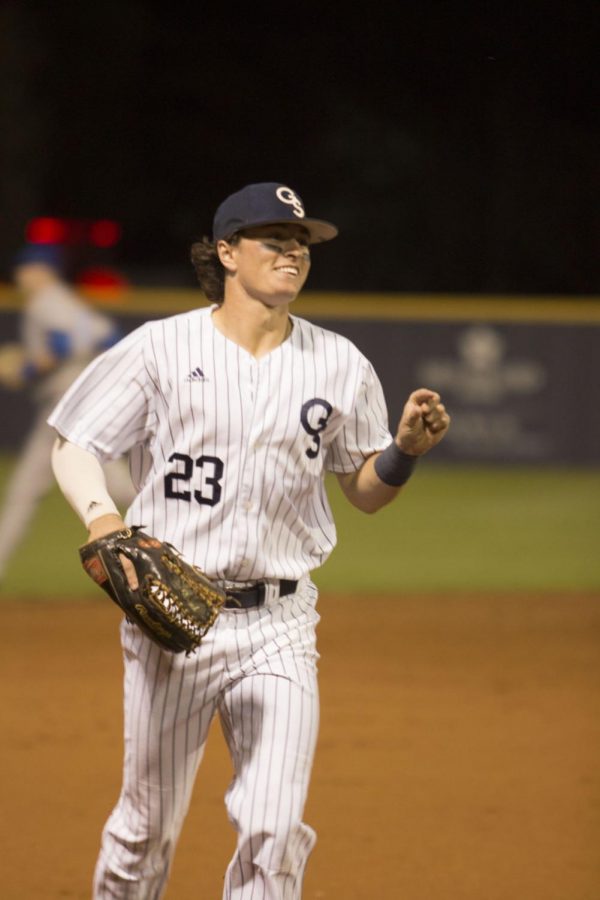 The Georgia Southern baseball team on Tuesday defeated The Citadel Bulldogs 7-3 at Joe Riley Park in Charleston, South Carolina, improving the Eagles to 11-9 this season.

GS senior outfielder Jordan Wren had a big game offensively with two hits – one of which was an RBI triple – and two runs scored. Wren scored the first run of the game on a Citadel throwing error, and his triple came in the third inning off Citadel sophomore starter Alex Bialakis. That made the score 3-0, Eagles.

The Citadel scored its first run in the fourth inning off a throwing error by GS. The unearned run for the Bulldogs was scored by sophomore first baseman Ben Peden.

The Citadel narrowed the margin to 6-3 in the sixth inning when freshman second baseman J.D. Davis singled to right field with the bases loaded, driving in two runs for the Bulldogs.

Two innings later, GS junior outfielder Logan Baldwin drove in what would be the game’s final run with a single to score senior infielder Cal Baker.

GS redshirt junior right-handed pitcher Adam Kelly allowed two runs over four innings, earning the victory in his first decision of the season. Senior pitcher Jacob Condra-Bogan closed the game for the Eagles, pitching the last two innings and striking out five of the seven batters he faced.

Bialakis (0-2) was the losing pitcher for the Bulldogs, who fell to 7-13 this season with the loss.

Georgia Southern will be playing The Citadel in the second game of their series at J.I. Clements Stadium in Statesboro on Wednesday.

The Eagles will travel to Arlington, Texas this weekend for a three-game series with the UT Arlington Mavericks (11-11). After another road game against College of Charleston next Tuesday, they will return home the following weekend, starting Friday, March 31 with a three-game conference home series against Louisiana-Monroe.

Sun Belt Conference play will pick up in the coming weeks. Currently, Troy (12-7) leads the East Division and Texas State (13-8) leads the West Division. However, no Sun Belt team has played more than three conference games so far, so it is still very early in the conference season.