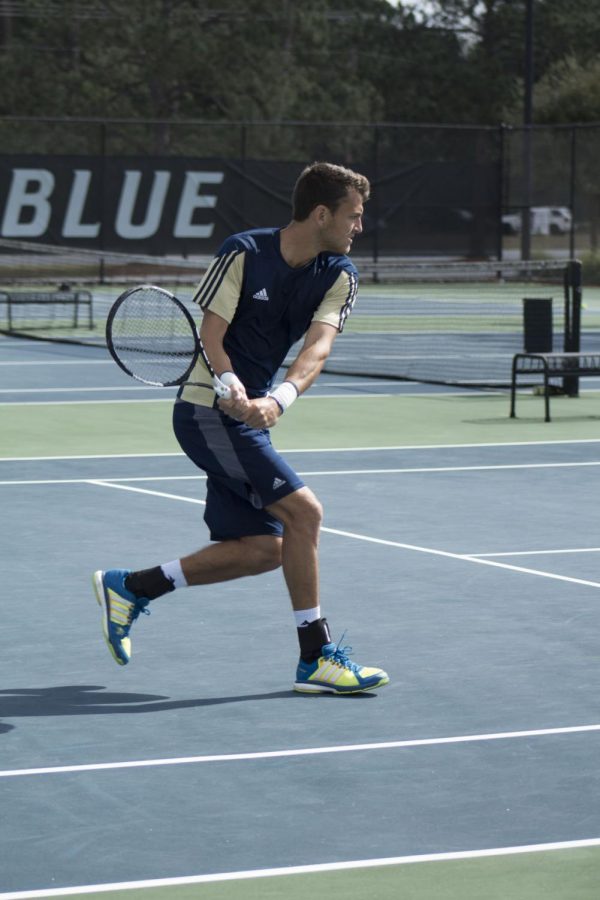 Diego Finkelstein prepares for his shot.

The Georgia Southern men’s tennis team on Monday defeated the East Carolina Pirates, 5-2, at the Wallis Tennis Center in Statesboro.

Georgia Southern lengthened its home win streak to 11 matches and remained undefeated in Statesboro this season.

GS tennis players have been referring to the Wallis Tennis Center as “the nest”, and it has become their motivation to “hashtag protect the nest,” according to GS head coach Sander Koning.

The victory came after losing to ECU the last two seasons under Koning.

“They’re a team that is very consistent,” Koning said. “They’re very good and disciplined in the fundamentals.”

The match began with the Eagles clinching the doubles point behind the tiebreak victory of senior Chris Kerrigan and freshman Diego Finkelstein in the No. 1 doubles match.

“Diego and Chris really set the tone for singles,” Koning said. “To win that set in a tiebreak to clinch the doubles point … that really propelled us in singles.”

In singles play, four Eagles won their matches to make the final count 5-2 in favor of Georgia Southern. Alcala won the No. 1 singles match over McGeehan in a firs-to-10-points tiebreaker.

“I think I wanted it more than my opponent,” Alcala said.

Freshman Stefano Di Aloy earned the clinching fourth point for the Eagles with his 6-4 win over Georgi in No. 3 singles. Di Aloy said the Eagles are used to the “rhythm of the court” at home and that it gives them an advantage over opponents.

Junior Eddie Landin and Finkelstein also won their singles matches to earn a point each for GS.

The Eagles’ next match is Saturday, March 11 at 9 a.m. against Abilene Christian in Abilene, Texas. The next nine matches will be on the road for Georgia Southern, and they will be back home to face Coastal Carolina in their final regular season match on Saturday, April 15.