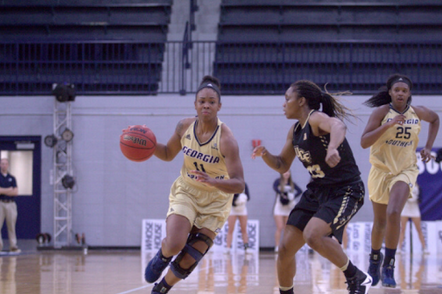 After exiting the Sun Belt Conference Tournament in the first round, Georgia Southern ends the regular season at 13-17 overall.

The fifth-seeded Eagles fell to eleventh-seeded Arkansas State (7-24, 5-15) 61-54. The loss to the Red Wolves was unexpected, as the Red Wolves entered the game next to last in the Sun Belt.

After a slow 4-10 start, it looked as if the bad fortunes of last season would carry over into the new season. However, Drown’s team finished in the top half of the Sun Belt standings after finishing the regular season 9-9 in conference.

The women’s basketball program says goodbye to two seniors who were integral parts to the team within the past few years. Both Angel McGowan and Patrice Butler were named to the Sun Belt All-Conference Second Team.

This year’s selection was the second consecutive year of making All-Conference Second Team for McGowan. McGowan was the conference’s third leading scorer with 15.7 points per game.

Butler was fourth in scoring and eighth in rebounding in the Sun Belt. Starting point guard Alexis Sams also graduates along with forward Jessica Marcus.

The leadership and contributions that Sams, McGowan, and Butler provided as starters will be challenging for Kip Drown and the Eagles to manage.

The large freshman class of five players who joined Georgia Southern in 2016 and the rest of the team will embrace larger roles in the 2017-2018. One player cannot replace the production of any of the three starting seniors alone.

Drown has spoken highly of the freshman class and on the difficulty of finding playing time for all of them in the past. With the graduations of the seniors, that task will become a lot easier for him.