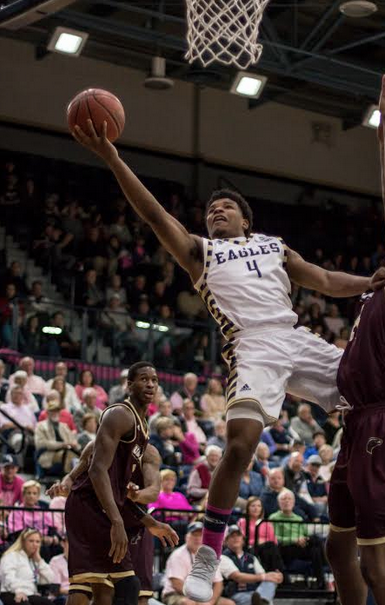 The rivalry game is back as Georgia Southern (18-11) goes to Atlanta to face off against the Georgia State Panthers (18-10) in men’s basketball. The Eagles and Panthers are currently tied for second in the Sun Belt with Georgia Southern owning the tie break with their previous home win against GSU 88-65 this year. Both teams are still in contention for first place in the conference, and whoever loses this game will bow out of contention.

Both teams are coming off a weekend of conference wins, with the Eagles winning both of their games on the road, overcoming their four-game road losing streak. The Panthers, on the other hand, have won their games at home, as they build momentum for the battle for “The Real GSU”.

The Eagles rely on their back-court trio of sophomores Ike Smith and Tookie Brown as well as junior Mike Hughes to provide an offensive spark for their team. Smith and Brown lead the Sun Belt in scoring as one and two with 19.8 and 18.0 points per game respectively. In the last rivalry match up, Brown had a game high 29 points while shooting 9-10 from the field, a career high shooting percentage in a game for Brown. Smith added 22 points and seven rebounds while Hughes had 12 points to help the Eagles secure a victory in Atlanta on New Year’s Eve.

For the Panthers to defeat the Eagles at home, they need to have reliable play from their guards. Senior Jeremy Hollowell scored 21 points with seven rebounds for the Panthers in their last game against GS, but didn’t receive much help from outside the paint. GSU only shot 33 percent from the field that game and 20 percent from three. If they hope to beat the Eagles to secure second place, they need a better scoring effort from three-point range.

If the Eagles hope to pull the double on the Panthers this season, they need to get better rebounding the basketball to hinder second chance opportunities.

“That’s definitely something that’s hurt us in the past couple of weeks, and we’ve been working on that. We’ve got to hold everyone accountable, whether it’s our guards or our big men down low,” GS assistant coach Ben Betts said.

They were outrebounded by the Panthers 51 to 31, and if it wasn’t for the Panthers shooting badly from the field, the Eagles might not have beat the Panthers.

The Eagles and the Panthers battle it out Saturday March 4 at 2:15 p.m.