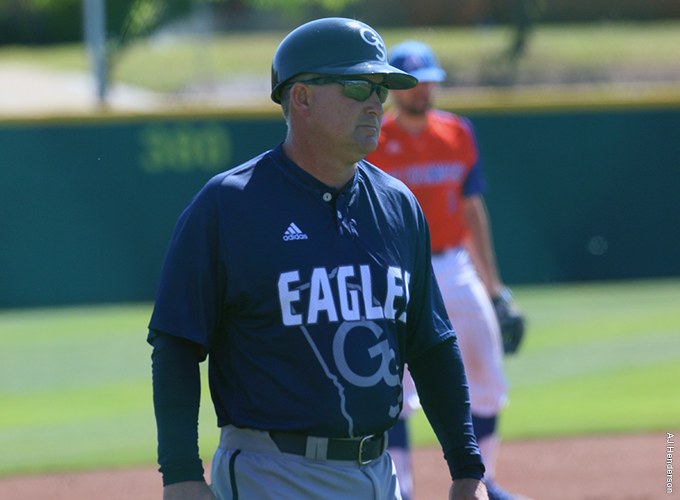 Game one was a tight affair for the Eagles. They found themselves down 3-0 early and were able to claw back to make it 3-2, but were not able to break through the final barrier.

The 3-2 loss was a tough one for the Eagles. They got a solid eight innings pitched from senior Evan Challenger, who fell to 0-4 on the season, but the offense couldn’t get that last needed run off of the Mavericks pitching staff.

A positive on the offensive side to take away for the Eagles was working five walks and only being struck out twice, an upgrade from 18 strikeouts in the midweek series against the Citadel.

Senior Jordan Wren was able to lead the Eagle offense in this one, going 2-4 with a couple of singles.

In the second matchup between the Eagles and Mavericks Saturday, it ended in dramatic fashion with a special win for Coach Rodney Hennon.

Freshman Steven Curry picked up two game changing RBIs, including the go ahead one when he beat out a ground ball to put the Eagles up 4-3.

Senior Landon Hughes came in to finish the game with a runner on first and no outs in the bottom of the ninth and was able to get three quick outs to secure the win.

The victory gave Coach Hennon the 700th in his career and a confidence booster for the team heading into the rubber match of the series.

A strong start and a strong finish for the Eagles helped them get their first Sun Belt series win of the season.

The first inning went the Eagles’ way, as they were able to send 10 batters to the plate and got a two RBI single from senior CJ Brazil. Brazil would later come up clutch in the eighth, hitting in the go ahead single would ultimately winning the game.

This strong showing from the Eagles advanced them to 3-3 in Sun Belt play, before heading off to play the College of Charleston in Mt. Pleasant, SC. They then return home for a weekend series against UL Monroe.