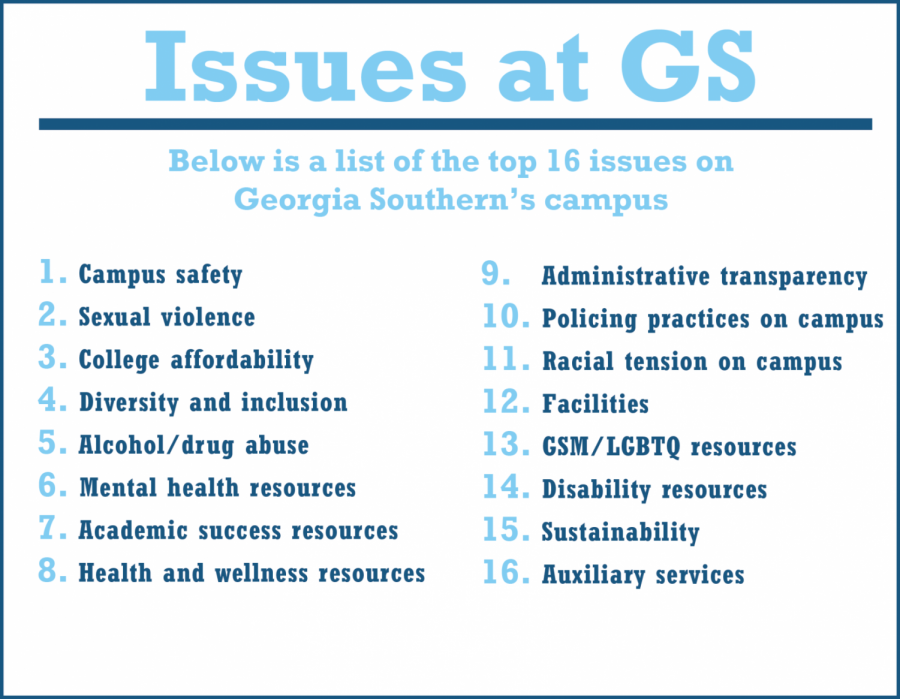 This is a list of the Top 16 issues that GS feel like should be addressed by the SGA and other campus officials.

The Student Government Association (SGA) has recently devised a program called SGA 20/20, a system where students can rank their main concerns online and those in higher positions will work to resolve those issues.

With the launch of the SGA Vision 20/20 program, the statewide program’s goal is “intended to gather concerns of college students via survey in order to create a best practices guide for all of the collegiate SGA’s in the state of Georgia,” according to a George-Anne article on the program launch.

Sarah Tuz, junior public relations major, was not aware of SGA’s program, but wishes “there were more programs that help victims [of sexual assault] that want to get help.”

Tuz was also concerned for students that are afraid to speak up about their experiences due to the lack of information made public to students.

Mary Catherine Pittman, junior journalism major, thinks that SGA could alleviate the issue of racial tensions by introducing fun things to do on campus that would be inclusive while discussing the topics at hand.

“I feel like racial tensions on campus is high. Students were talking about it in my media theories class the other day,” Pittman said.

Pittman also believes that SGA’s 20/20 survey could improve issues around campus if more students participated in the survey.

The SGA 20/20 platform allows SGA as well as the GS administration to hold accountability for the main concerns and identify and ensure that each issue is being handled in a timely manner.

SGA 20/20 was created when SGA president Dylan John went to a summer retreat for SGA and at the event, noticed that many senators within other SGA’s had growing concerns within their college as well. The biggest concern that John had was the overwhelming amount of issues that were spoken on but the very little factual data that was presented to show proof of any issue.

“When we went to the state level, there were discussions on sexual assault, discussions on college affordability, but these were all student government presidents just throwing out what they thought were issues,” John said. “There is no factual data, there is no ranking. There was to me the biggest concern, there was no consultation from the students.”

After John proposed SGA 20/20, 18 other institutions, including Armstrong State University and Georgia State University, each established the same ranking system for their schools. So far there has been over 1,200 validated responses within the institutions collectively.

Within SGA 20/20, there have been many senators that have been assigned to tackle each ranked issue within the system so each issue will have a fair shot in being resolved in the proper manner.

Below is a list of the top 16 issues on Georgia Southern’s campus, according to Vision 20/20 ranking system: