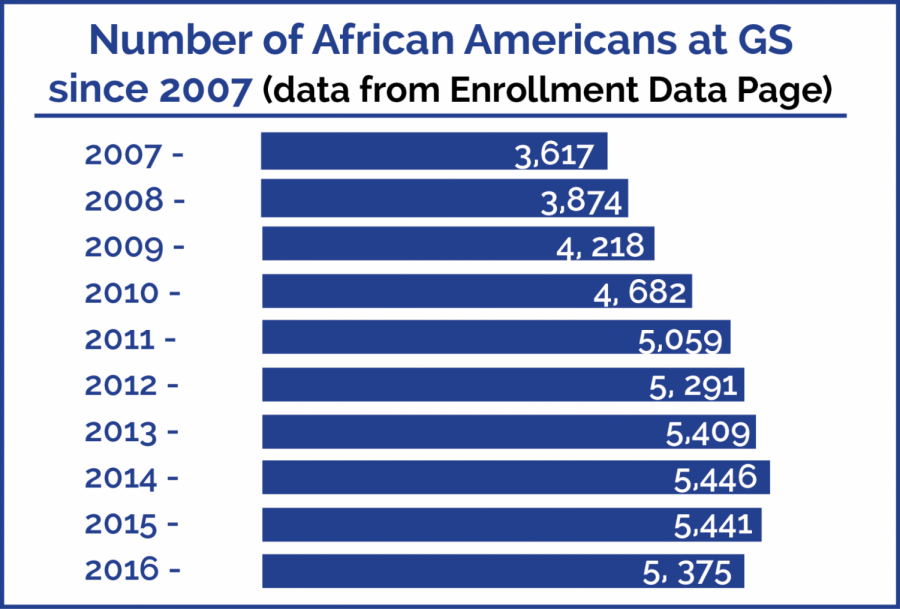 Every February, Black History Month, a month dedicated to celebrating the history and the accomplishments of African-Americans, is celebrated all across the nation including on Georgia Southern’s campus.

GS’ African-American history is quite diverse. 70 years after Georgia Southern University was established, the first celebrations of Black History Month (known before 1976 as Negro or Black History Week) took place across the United States.

Before 1976, however, Georgia Southern had many firsts in African-American history.

In 1965, GS admitted its first African-American student and graduate student, John Bradley, which was known at the time as Georgia Southern College. At the time, Bradley had already obtained his bachelor’s degree from Texas Southern University, but needed to take a few courses in order to teach in Georgia.

By 1969, Ulysses Mosley and Jessie Ziegler Carter were the first African-American male and female to complete their entire college career at GS. By 1985, GS graduated its 500th African-American student and from that the First 500 alumni network was created.

Both alumni were honored with scholarships named after them from the Black Alumni of Georgia Southern Scholarship.

Even though White feels as if Black History Month isn’t celebrated enough on campus, he does feel as if progress has been made for African-Americans throughout their education career.

“I always figured that for a black man to attend any college in the South was almost impossible but the fact that he [John Bradley] was not only admitted in 1965, during the Civil Rights movement, but he graduated too goes to show that progress was being made,” White said.

Andrea Araujo, sophomore food science and nutrition major, believes that Black History Month is important and should be celebrated more throughout campus.

“[Black History Month] can teach us and reminds us of how freedom and equality was denied for so many people and how people fought to make a change,” Araujo said.

Other students feel as if GS does a great job of educating students about Black History Month.

Maria Movilla, junior marketing and logistics major, said, “[The school] teaches me more about Black History and their struggles and oppression here in the states, since I am an international student.”