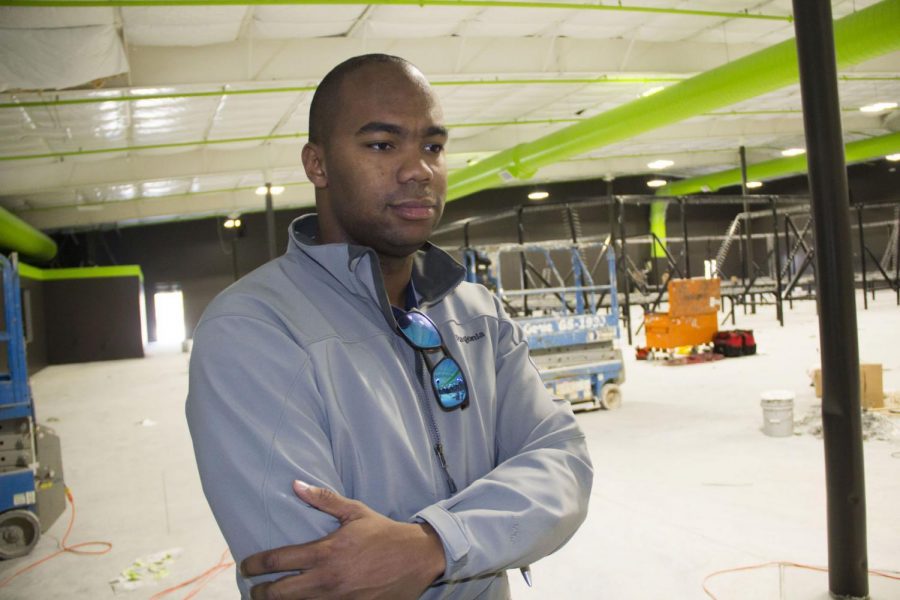 Trampolines of all different shapes, sizes and angles adorn the floor. Paintball players run and hide behind bunkers, walls and other simulated terrain features.

Paintball, trampolines and many other entertainment options will be inside a facility the size of three supermarket stores combined, and it’s opening just around the corner.

The long-anticipated Flight Factory entertainment complex will have it’s final inspection on Feb. 10, at its location on East Parrish Street and officially open on Feb. 24.

Davis has been busy preparing the facility for the past couple months. Soon, others will be able to see the fruition of Davis and his team’s work.

Activities in the park

According to Davis, there will be three initial phases for the facility project. The first phase will be completed when the facility opens. It will include an indoor trampoline park, arcade, a wipeout machine and dodgeball, volleyball and basketball courts.

As well, the paintball range is 60,000 square feet in size. When it is completed, it will be the largest indoor paintball facility in the country.

“It’s really the state of Georgia that governs this [facility]. It’s so big, so after a certain size, you go to the state,” Davis said.

The building where Flight Factory is now used to be home to Statesboro’s flea market and a paintball range. The former owner of the market built part of the current paintball range three years ago.

“In senior year, I actually came and played paintball. I thought it was really cool…I thought ‘Man, this is awesome, and no one knows about this thing in Statesboro,’” Davis said.

Davis came up with the Flight Factory idea at the end of 2014. At the beginning of the next year, he rented an office from the Business Innovation Group in downtown Statesboro and worked on preliminary aspects of his project, such as research and construction planning.

He decided to purchase the paintball field in November 2015.

“It was a good idea, but it wasn’t executed as well as it could’ve been…so we decided to close it to build this,” Davis said.

An eye toward change

Davis envisioned an entertainment facility that was different from other options that the Statesboro area had to offer.

“We wanted to fill it with something that’s high energy fun, healthy and exciting. We thought nothing is better than indoor trampolines, because there’s so many options,” Davis said.

Davis believes that the key to the Flight Factory’s success is to modify the facility over time, rather than keeping it the same.

Davis said, “We can sit here and constantly evolve and add new games, new systems…fitness classes and leagues and tournaments and fundraisers.”