Eagles Back to Winning Ways 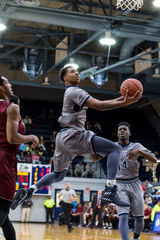 The Georgia Southern University men’s basketball team (15-8) beat Louisiana-Monroe (7-16) 76-62 at home. The Eagles beat the Warhawks on Breast Cancer Awareness night, giving the Eagles the double on ULM this season.

“This week of practice I think we won the game at practice Wednesday, Thursday Friday with our preparation and our mentality. We would have been good against most teams we would have played tonight,” GS men’s head basketball coach Mark Byington said.

Warhawk senior guard Marcus Washington led their team with 15 points as they came up short on the road. ULM didn’t shoot well from three-point range, only shooting 23 percent for the game going 4-17.

It was also a special night for senior guard James Holder as the Eagles had the pink out.

“It was a big deal because we had the pink out today and my grandma died of breast cancer, so it was a big deal for me to get in and get that W here at home,” Holder said.

The Eagles play Louisiana-Lafayette (14-9) next on Monday at home. The game starts at 7 p.m.