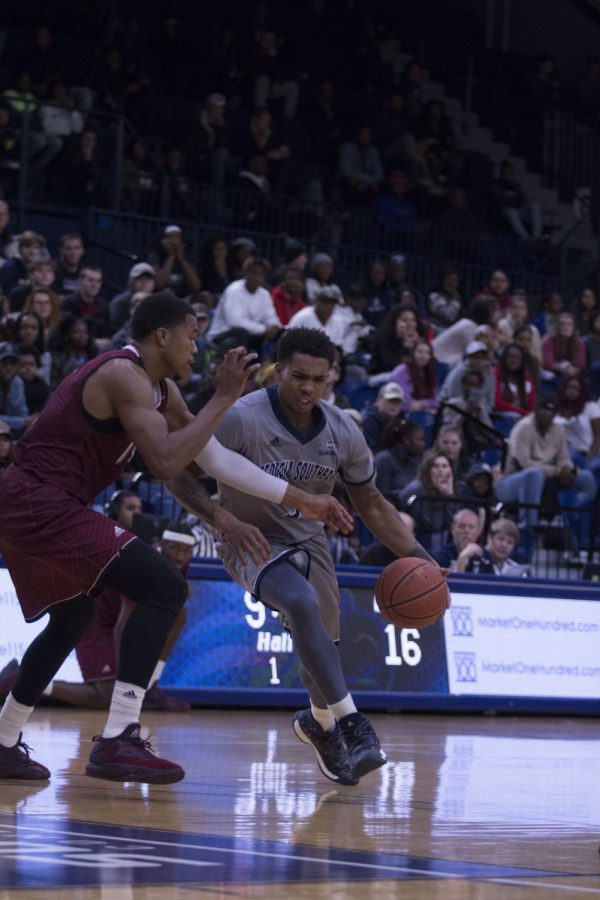 Ike Smith gets by his defender.

The Eagles (18-11) are now tied for second with Georgia State – whom they play this Saturday – at 11-5 in the conference. UT-Arlington leads the Sun Belt with a 12-3 conference record.

The Eagles shot 48 percent from the field, and they held Arkansas State to under 33 percent shooting.

GS Sophomore guard and Sun Belt leading scorer Ike Smith led the Eagles with 21 points and a game-high 10 rebounds. Smith did not attempt a three-pointer in the game and got to the foul line 13 times. He went 7-of-10 from the field in 33 minutes. Sophomore guard Tookie Brown scored 17 points on 6-of-12 shooting from the field.

The Eagles got bench contributions from sophomore forward Shawn O’Connell, who had eight points in seven minutes and junior guard Jake Allsmiller, who contributed six points and four rebounds.

Arkansas State senior guard Devin Carter led the Red Wolves with 15 points and 3 steals. Carter shot 2-of-12 from three-point range thanks to strong perimeter defense by the Eagles.

Junior guard Deven Simms added 12 points for the Red Wolves (19-9,10-5), who fell to fourth in the Sun Belt Conference standings with the loss.

The Eagles will stay in the state of Arkansas to face lowly Little Rock (13-15, 4-11) on Monday night. Little Rock has lost four in a row coming into the game. Saturday, March 4, GS will take on Georgia State in Atlanta in both teams’ last regular season game.

The Sun Belt Conference basketball tournament will begin on Wednesday, March 8 in New Orleans. The conference tournament champion receives an automatic bid to the NCAA tournament.