A Day In the Life: Men’s Basketball Edition 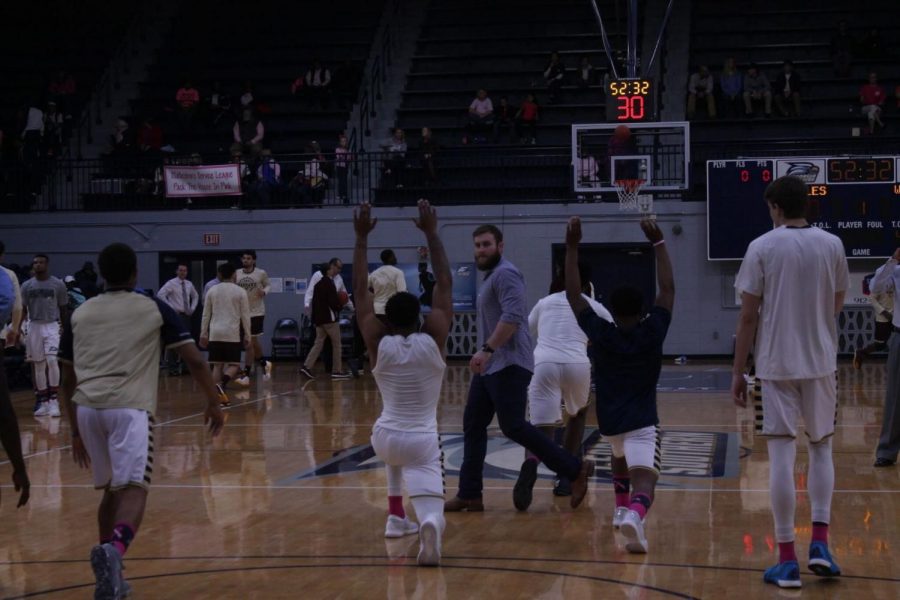 The basketball fans of Eagle Nation know what goes on during the games from the t-shirt tosses to the actual game itself, but not the pre-game preparations. The George-Anne and the Circle were granted access to enlighten Eagle fans on the men’s basketball team’s road from pre-game activities to post game interviews.

After their usual conference games on Mondays, the team usually get Tuesday off to recuperate from their home or road stretch of Saturday and Monday games. When Wednesday comes around, they come back ready to go for a Wednesday practice that begins another week or getting better or worse each week.

By the time Friday starts, they’ve scouted their opponent thoroughly and in-depth. The assistant coaches rotate who does the scouting reports for each opponent each game as they go from the game plan, to individual player tendencies, strengths and weaknesses, and how well they’ve played recently.

“We spend a long time on film, watching player’s abilities and tendencies to give to our guys to have the best chance to succeed,” assistant men’s basketball coach Ben Betts said.

The assistant coaches play a huge role for their scouting preparations as their attention to detail is crucial for the success of the team. Learning each team’s tendencies translates to their five on five practices that allow the scout team to run opponent’s plays to perfection.

“My coaching staff does a great job [of preparing our players], and everybody takes their ownership whether it be their scout or position. My assistant coaches work extremely hard and have a lot of pride and are a great asset for us,” head men’s basketball coach Mark Byington said.

Their Fridays start off with the team watching film, visually watching each critical player, how they play, what type of player they are, and how to stop them. The Eagles though not only look at opponents film, but their own as well. They look at the good and the bad of their previous game because they believe there’s always something to improve upon.

“The coaching staff gets the team ready for every game, and the scout team does a really good job getting the team ready so we know what plays they’re running before they even step on the court,” senior guard James Holder said.

Once Saturday starts, it’s Gameday. They started their day with a quick shoot around to get loose then went off into stretches. Then, they worked on basketball drills that involved quick shots, ball screens and a variety of other drills that complement the way they play.

Soon after, they work on game situations that give them the option of deciding whether to start the game with plan A or B. After some good simulations, they break for their traditional pre-game meal, which was at RJ’s Grill this particular game. They ate and talked with each other, relaxing their minds before the task at hand hours later.

The team met back in the locker room at 3:30 to establish the finishing touches to their game plan and get ready to play. Head men’s basketball coach Mark Byington gave a speech to his team before they went onto the court for pre-game warm-ups before an awaiting crowd of Eagle fans.

Once the game ends, media personnel and fans get the opportunity to talk with players about the game and take pictures and get autographs.

This game was a special one because it was a night dedicated to breast cancer victims and survivors.