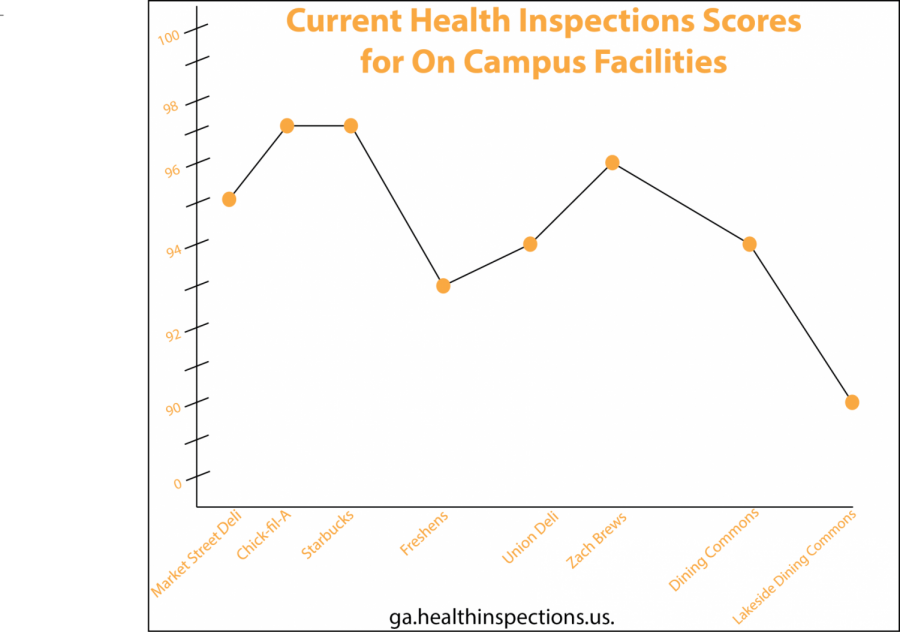 Chick-fil-A and Starbucks have the highest health inspection score for an on campus facility while Lakeside Dining Commons has the lowest score at 90.

On the left are two graphs that show more about Statesboro restaurant scores. Click on them to view them in more detail.

This past year, Statesboro’s many restaurants, cafes and bars shared one thing in common, a visit from the health inspector. From scores ranging from perfect 100s to the mid-50s and lower 60s, the health inspection scores from local Statesboro eateries and on-campus facilities might be surprising to some.

“It’s random when [establishments] come up in the system. When they do, they’re each assigned to a different inspector,” Middleton said.

There are four health inspectors in Bulloch County and each one has a different way of inspecting a restaurant or bar.

“I take temperatures first. Some inspectors might go straight to the cooler but it depends on the restaurant,” Middleton said.

Georgia Southern University is not inspected anymore or any less than other Statesboro or Bulloch County food places. The only thing that is out of the ordinary is that Dining Commons often has two inspectors in order to cut down on the amount of time it takes to inspect each station, as well the kitchen and back areas.

The duration of a health inspectors visit depends on the size of the facility.

“They usually about 45 minutes to an hour. Coffee places like Starbucks maybe 30 minutes. Dining Commons can last up to an hour or hour and a half,” Middleton said.

However, during the winter months, there isn’t a health violation that is typically prevalent.

Since August of 2016, more than 50 restaurants, bars, food facilities and more have been inspected in Bulloch County. A good majority received an A or a B, while a few received a C and one place received a U.

When a place gets their health inspection score, there are various things that can happen, depending on the letter grade they earned.

Places that earn below a B have to follow stricter rules.

The most recent restaurant to be given a U was Southern Palace located at 224 S. Main St. on Jan. 5. Their violations included not having a certified food safety manager, not using soap before hand washing and roaches, the latter which is a repeat violation.

Before Jan. 5, the restaurant earned a 91 during their inspection on Sept. 29 of last year. However, that score was only earned after receiving a 70, or C, in an inspection two days prior.

Of those five places, three received A’s on their re-inspection, one received a B and the last place, My Ranchero Mexican Grill, closed shortly after receiving the score.

All of GS’ on campus facilities received A’s for their health inspection scores. While none of GS’ facilities got a perfect 100 for their score, Chick-fil-A and Starbucks got the highest grades at 97 each, while Lakeside Dining Commons got the lowest score, a 90 due to cooks not washing their hands after touching trash and not changing gloves, according to ga.healthinspections.us.

Woods said, “If I’m eating there the cleanliness of the place has to be at least an A.”