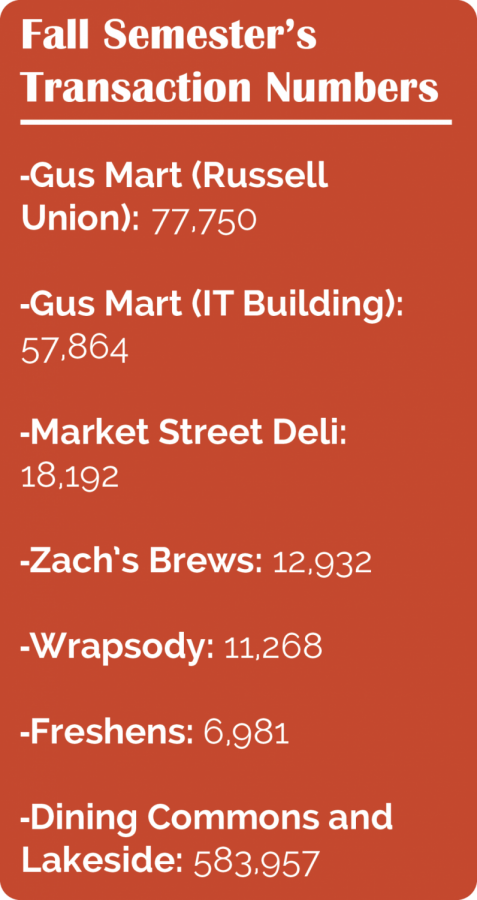 Transaction numbers at each on campus dining facility during the Fall of 2016.

Over the past few years, dining on Georgia Southern’s campus has undergone many upgrades and updates, prompting wait times and transaction numbers to undergo changes as well.

According to Amber Culpepper, assistant university counsel in the Office of Legal Affairs, Wednesday between 11 a.m. and 1 p.m. is the busiest time for dining transactions on campus.

Even though lunch time is the busiest for on campus dining, numerous GS students agree and they’re willing to bear waiting in lunch rush lines.

“The IT [building] sandwiches are the best and the wait for the bagel fries are totally worth it,” Avery Smith, junior sociology major, said.

“I don’t have a dining plan this semester, but I do have Eaglexpress, so I will go to Lakeside on occasion. Gus Mart is great for snacks, so I’ll go there if I need something quick,” Cohen said.

Cohen added that she avoids Chick-Fil-A during lunch time because it tends to get crazy.

“[On campus dining] is convenient for being on campus all day long. I usually get Chick-fil-A when I’m on campus,” Sophie Stratigos, junior film production major, said.

When on a tight schedule or if you cannot stand the lines, GS offers Tapingo, a mobile pre-ordering service designed for people to place their order online, through smartphone, tablet or computer.

Stratigos believes that Tapingo does help with the wait time in line but the lines are still extremely long, especially at Chick-Fil-A.