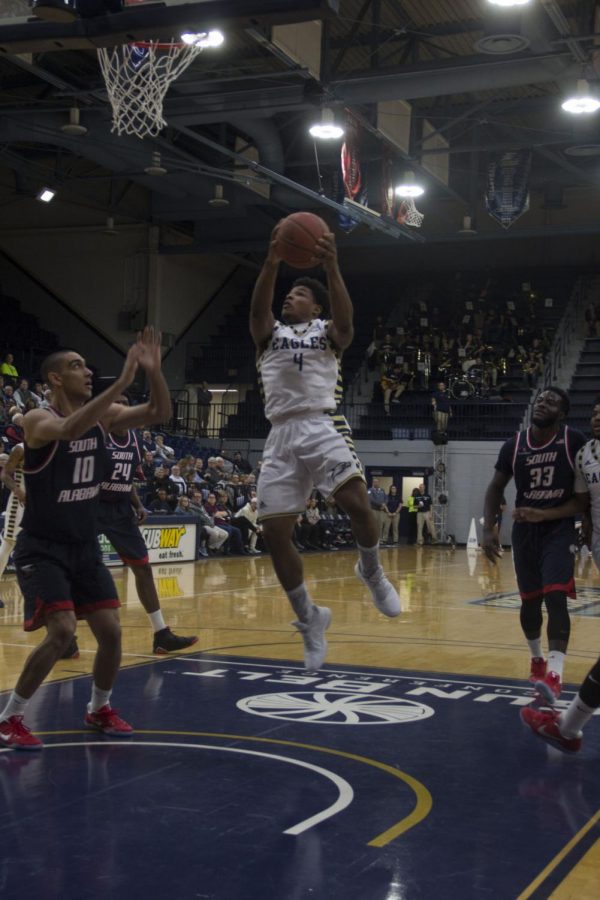 6-10. That was the record of Georgia Southern’s men’s basketball team in their first 16 games last season. They were young, inexperienced and full of questions of just how successful this team could be. They ended up finishing the season 14-17 after losing in the first round of the Sun Belt tournament 67-61 to a mediocre South Alabama team.

This year has played a whole different tune for the Eagles as they start the season 10-6 (3-0) and undefeated in the conference. They’ve ended their four game home stand undefeated with a margin of victory of 20 points. It’s the first time the Eagles have won their first three conference games since 2011-2012 and the first time ever in the Sun Belt.

The Eagles are led by a back-court trio of junior Mike Hughes and sophomores Tookie Brown and Ike Smith. Smith leads the Sun Belt in scoring averaging 19.7 points per game while shooting a 50 percent field goal percentage.

As a trio they combine for 47.7 points per game while adding 12 rebounds and 8 assists for the season. From a season ago they averaged 44.4 points per game with 13 rebounds and 6 assists, showing progression on the stat sheet, but their maturity and teamwork has also been a major contribution to their success so far this season.

“We’re more close this season than I can say we were last season. We hang out off the court and on the court and pretty much around each other a lot,” Hughes said.

While their back-court trio has been established as the most notable part of their team, the contributions from juniors Jake Allsmiller, BJ Gladden and sophomore Shawn O’Connell give the Eagles the experienced depth they didn’t have last year. With multiple contributors on the offensive side, the production on the court hasn’t wavered when changes to the lineup are made.

Though the Eagles have been successful in in the past few weeks, Byington can’t help but look to improve all facets of their game, as the Eagles are not perfect.

“Most times we only think of what we can do to improve in our losses, but we also need to start thinking on what we can improve on in our wins too,” Byington said.

With the winning mentality the Eagles have, they still can’t afford to lose the grip of their lead in the Sun Belt. They only lead the conference by half a game and the more they can do do early to build upon that lead will only help them in the long run of becoming the number one seed in the conference for the first time in school’s history.

The ultimate goal of the Eagles is to win the Sun Belt conference and make their fourth appearance in the NCAA tournament and first since 1992. The Eagles aren’t the best statistical team in college basketball, but they’ve found a knack for knowing how to win games since their 37 point loss to Big Ten opponent Minnesota.

So far, they have shown the potential to be a special team, they just need to show the world they can finish what they’ve started and achieve the goal of becoming conference champions.