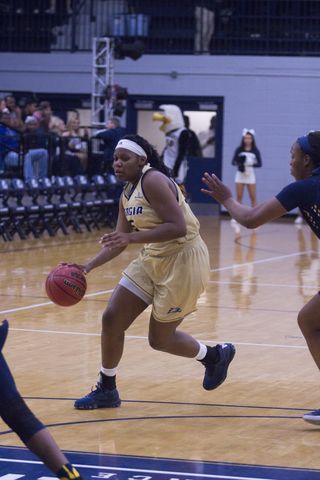 Following a slow 3-5 start to the season, the Eagles hit a rough patch. They lost five out of their next six contests, four of them inside of Hanner Fieldhouse.

Starting center Patrice Butler reached the 1,000 point milestone in the Eagles 46-55 home loss to the South Alabama Jaguars on Jan. 5. Butler was good for 12 points, 7 rebounds, and three blocks.

On Saturday night, the Eagles welcomed Sun Belt Champions Troy into Hanner Fieldhouse. Points were at a premium as Georgia Southern was able to keep pace with the high-scoring Trojans. Troy racked up 13 offensive rebounds in the first half, showing why they’re a top-3 rebounding team in the country.

Things spiraled out of control in the second half for GS, as Troy opened their lead up to 20 points with just three minutes remaining in the third quarter. But a late surge from the Eagles brought the crowd to their feet, and Troy’s lead down to two within the final minute of the game.

What the Eagles did during their late run that they were unable to do in the first half was dominate the boards, and prevent Troy from getting good looks beyond the three-point line. However, Troy was able to hold on and win the game 89-86, pushing the Eagles to 4-10 and 0-3 in the Sun Belt.

Head Coach Kip Drown put freshman Alexis Brown into the starting lineup, and she played well, recording 17 points and two steals. Three more Eagles scored in double figures. Angel McGowan poured in 19 points and had four assists. The Butler sisters collected double-doubles. Sierra finished with 14 points and 14 rebounds, while Patrice grabbed 11 rebounds and scored a game-high 24 points. Though the Eagles could not grab the win, the courage they showed in the second half was commendable.

“I’m really proud of our kids. We really fought hard and competed hard. This is one of the top-3 rebounding teams in the country and we out-rebounded them by five,” Coach Drown said. “I think that’s the best 40 minutes of competing that we have put together in the last year and a half. I’m excited about what I saw tonight and where we’re going.”

The Eagles’ next matchup is on Thursday as they go on the road to face Louisiana-Monroe (3-11, 0-3).