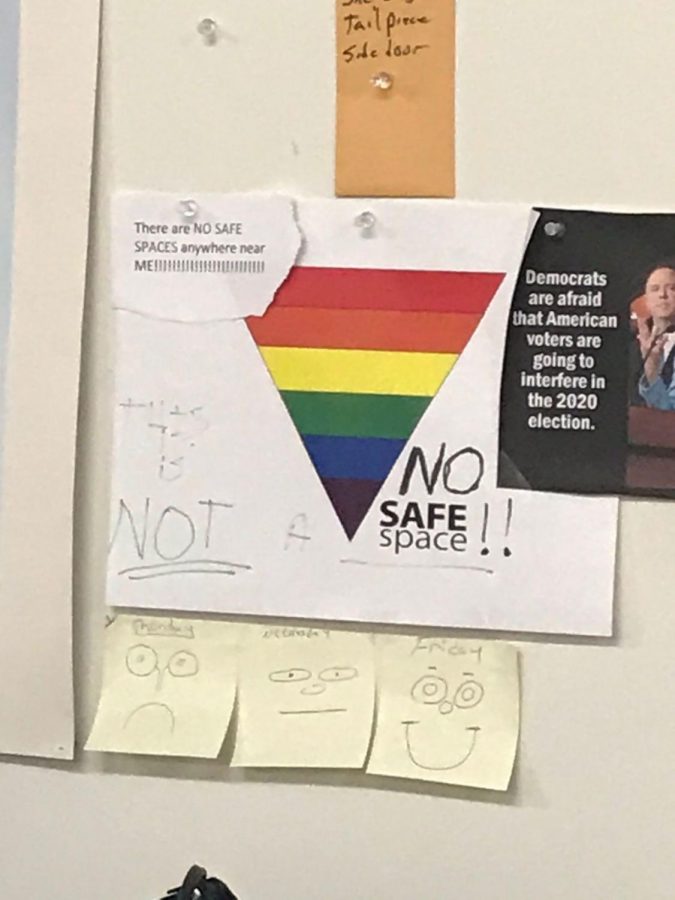 STATESBORO — A defaced Safe Space sign was found in a building on Georgia Southern’s Statesboro campus. An investigation by The George-Anne revealed a Title IX report, filed nearly seven months prior, about the same sign.

The sign was found in the lockshop office of GS’ Service Response Center on South Main Street. That office is used by employees, including graduate students, who need to pick-up or return physical keys.

The sign features an upside-down rainbow triangle, part of the Safe Space logo, with the text “Safe Space” accompanied by hand-written text “This is NOT A [Safe Space]” and “NO [Safe Space].”

Former GS limited-term faculty member Zachary Karazsia, Ph.D, snapped an image of the sign while turning in his keys on June 25, later posting the image on his Twitter account.

“As I took the picture that is posted on my Twitter account, the three employees looked at me and one stated, ‘I hope you’re not going to report us’ in a joking manner,” wrote Karazsia in a Twitter direct message conversation with The George-Anne. “I told them ‘Well, this is inappropriate.’ His response was, ‘That’s why we ask you to knock on the door before entering.’ I replied, ‘I did knock. But it still isn’t appropriate.’”

The George-Anne sent Abby Fuller, daily managing editor, to the office on June 26 to confirm the presence of the sign. Fuller was denied entry by an employee citing COVID-19 concerns.

The employee also told Fuller they were unaware of the sign’s presence.

The report, jointly filed in December 2019 by two current GS employees who wished to remain anonymous and provided to The George-Anne by one of the employees, detailed the sign and requested the university investigate the incident.

“It made my LGBTQ coworker feel unsafe and uncomfortable. It goes against what Georgia Southern is supposed to stand for,” said one of the employees who filed the Title IX report. “No one should be made to feel unsafe or uncomfortable on campus.”

The employee added that the only follow-up they got from the office of equal opportunity and Title IX was a phone call confirming they would look into it.

In a statement to The George-Anne, Jennifer Wise, director of communications, acknowledged the December 2019 Title IX report and said the office of equal opportunity and Title IX will reinvestigate.

“Information gathered at that time indicated the signage was located in a personal workspace not accessible to the public or readily viewable by others,” said Wise. “This most recent report provides additional context to the 2019 report, and is prompting the university to take a renewed look into this report.”

Wise added that the sign has since been taken down.

According to the counseling center’s website, Safe Space is a campus-wide inclusive initiative supporting gender and sexual minority students in the campus community.

The same page also says any employee with the decal identifies themselves as “safe, educated, and aware people,” pledging to six inclusive standards outlined on the website.