A shift in business: What is new at Eagle Creek Brewery 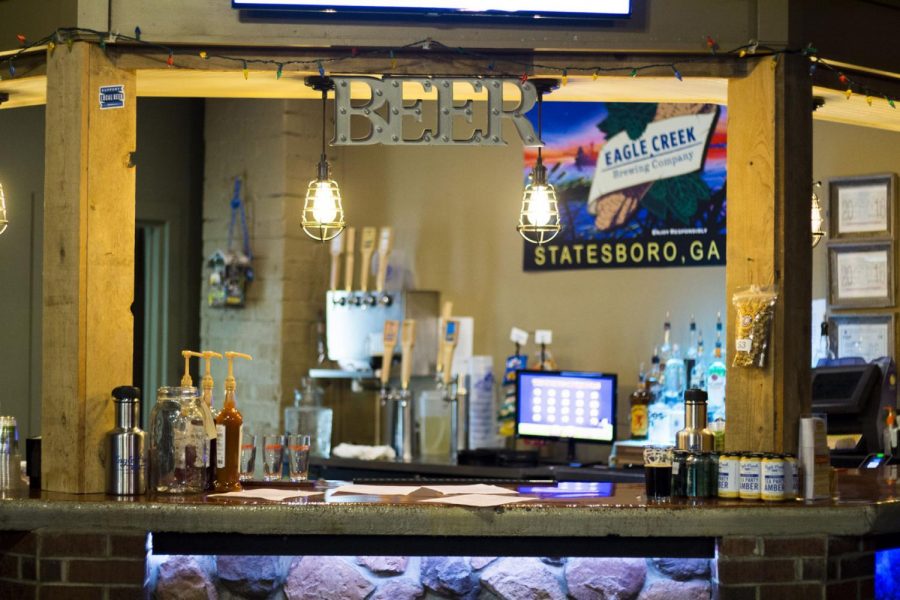 Although Statesboro is small, it is home to many unique and interesting places. One such place is Eagle Creek Brewing Company, Statesboro’s only local brewery. Nestled right off of Savannah Avenue downtown, Eagle Creek has been brewing signature beers in our backyard since 2013.

Today, Eagle Creek has acquired a new license which allows them to expand their business in many new ways.

It all started with a question

The brewery was started by Franklin Dismuke and a friend of his where they had a conversation at New Year’s Eve party in 2012. In this conversation, Dismuke and his friend asked each other “Why doesn’t Statesboro have a brewery?”

With no answer to this question, they decided to become the answer, and Eagle Creek was born. After 18 months, Dismuke’s friend decided to give up his partnership, making him the sole owner and on July 23, 2013, Eagle Creek’s first beer was sold.

Since its opening, Eagle Creek has been operating solely as a brewery, which under Georgia laws means that as an establishment, it could only sell its beers through a distributor.

This also limited the brewery to only being allowed to provide a maximum of 36 ounces of beer per customer on site. That could only be done through the purchase of a tour of the brewery, where customers are given samples of their beers. This, however; all changed on Oct. 20, when Eagle Creek became what is known as a “Brewpub.”

“We are now responsible for our own destiny,” Dismuke said. “[The new license] allows us to operate and set our own standards to how we do business.”

From brewery to brewpub

Eagle Creek’s new license as a brewpub eliminates all prior limitations the business had. Now, Eagle Creek has the ability to sell food, liquor and extend their hours of operations. They are also allowed to sell their own packaged beer out the door, so one could get a drink and purchase a six-pack to take home.

Since their new licensing, Eagle Creek has already upgraded their bar to provide wines and certain kinds of liquor.

“[Now] if people want to come out and enjoy themselves, they can come and eat and drink as much as they want without regulations,” Dismuke said.

With this semester coming to an end, Eagle Creek will offer an expanded experience for patrons next semester. You will have the opportunity to eat, drink and enjoy yourself, especially on nights the brewery hosts live music.

You can follow Eagle Creek Brewery on Facebook to stay informed about upcoming events at the brewery and in the community.