One More Time for the 2016 senior class 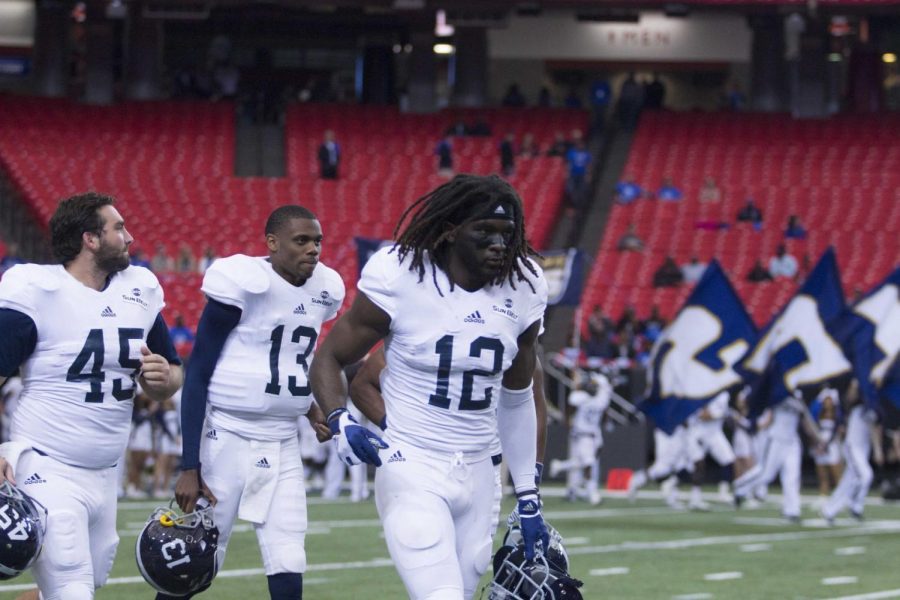 Let’s get this out of the way: the 2016 season has not been very good.

No, it’s actually been very bad.

The Eagles came into the season with high expectations from all of Eagle Nation, including the players and coaches. A second Sun Belt title was the target and with so many key players from the GoDaddy Bowl win and the 2014 conference championship season returning, it was a realistic goal.

Flash-forward a few months and the Eagles will not be participating in a postseason bowl game. It’s no doubt a disappointment to the players, coaches, students and fans that GS won’t compete for more hardware after this weekend’s game against Troy.

However, the hardships that the team faced this season shouldn’t take away from anything that this senior class has accomplished. When it’s all said and done, this senior class will go down as one of the best in GS history.

Add in the fact that these players have done it under three very different head coaches, and everything they’ve accomplished is even more incredible. They’re a tight-knit group of players that have forged bonds that will go on beyond this season.

In between all of that has been a number of national award nominations, All-conference selections and plenty of broken records to go along with 29 wins over the course of their four years wearing the blue and white.

As a reporter for the last two seasons, it’s been fun to cover a group of players as full of talent and personality as this group is. They’ve shown class after the wins and after the losses, and have always been great to work with.

And as a fan of GS football, it’s been a pleasure to watch them be successful in the move from the FCS to the FBS and to keep this program relevant through the often-difficult transition years that a program faces with a vertical move.

So to the students, yes, it’s been a hard year. However, regardless of what you think of the coaching staff or of the team’s performance so far, we owe it to this senior class to #PackPaulson one more time this season. It will be the last chance we get to see this historically great group of seniors play.

BJ Johnson on his favorite moment on the field:

“Probably the (game) when we won the (2014 Sun Belt) conference championship here, when the fans stormed the field. I’ve never experienced anything like that.”

Favian Upshaw on what he’ll miss most:

“Just the fans. They always show support, even this year; things didn’t go the way they thought or the way we thought. But they came out every game and showed support even on the away games.”

Matt Breida on his most memorable win as an Eagle:

“Beating Florida. The atmosphere was crazy. And the (Florida) fans there were just so shocked. They couldn’t believe we had won.”

Nardo Govan on his last game with this senior class:

“You can’t ask for a better group. We love each other, we lean on each other. It’s going to be something to cry about afterwards.”

Andy Kwon on playing the final game in Paulson:

“Paulson Stadium is a special place. The things we’ve been able to do here these past four years is amazing.”

Ironhead Gallon on what this senior class has accomplished:

“We always push through adversity and we always make the most of each situation. We always stick together.”