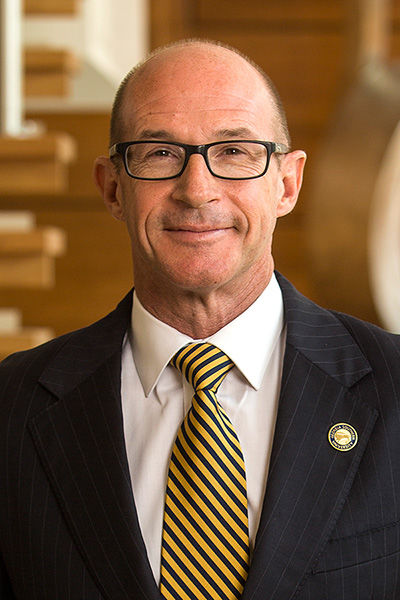 “The best statement I can make about [off-campus crime] is enough is enough. Our students deserve more. Parents expect more. Our community expects more,” Hebert said.

A few crimes occurring in off-campus apartment complexes this semester have raised concern among students when no Eagle Alerts were released to students, faculty and parents.

However, Hebert plans to work with the University Police Department (UPD) to expand the perimeter of the alert system, which was determined by the Clery Act, a federal law that requires universities to report crimes on campus.

“We are in the process of opening some discussion about whether or not we should extend that perimeter for reporting purposes,” Hebert said. “I’m not faulting UPD, not at all. They are following the protocol [for Eagle Alerts] that was written down, but I would prefer to air on the conservative side to ensure safety of our students, and I think they would accept that. In fact, I think they would embrace redefining the perimeter.”

Due to the current limits of the Eagle Alert system, some crimes, including armed robberies and other violent acts, do not qualify for emergency notices if they are too far from campus, including off-campus apartment complexes.

Hebert believes crime in the areas surrounding the GS campus has increased recently.

“[Crime], from what I understand, has cycled. They put a really big dent in criminal behavior several years ago here in Statesboro, and it’s started to raise its ugly head again, and we’re going to put a dent in it. We’re not going to have that,” Hebert said.

According to Hebert, he and UPD will work through the issues involved in expanding the Eagle Alert system’s perimeter.

Hebert said, “The mayor and I have called a meeting. We are getting both sides of law enforcement involved, and we are stepping up big time because we do not want this in our community, period. Enough is enough. We’ve had it.”