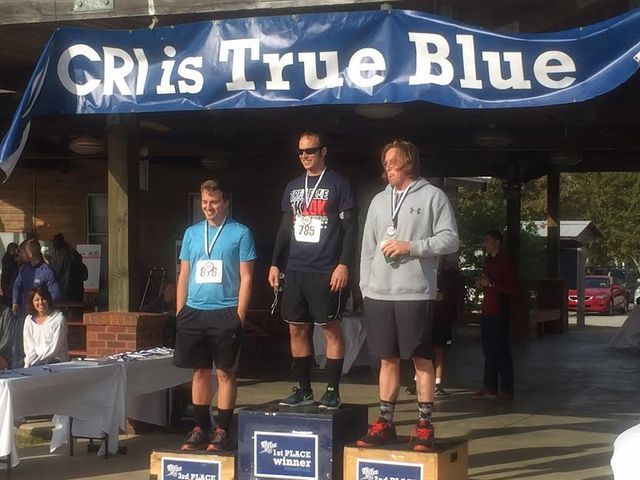 Campus Recreation and Intramurals (CRI) teamed up with Health Services and the Military and Veteran Student Office last Saturday to host the annual True Blue 5k/10k. In light of Veteran’s Day last Friday, the race adopted a new emphasis on military support and appreciation.

“This year, it was a little bit different because the game wasn’t on Saturday, it was on Thursday, so with Veteran’s Day being the day before, we partnered with the Military and Veteran Student Office and made it the ‘Red, White and True Blue 5k/10k,’” Stefanie Rodgers, CRI fitness director and coordinator of the event, said.

In past years, the True Blue 5k/10k has served as a precursor to Georgia Southern University’s homecoming football game. Runners donned as much GS gear as possible in an effort to raise school spirit and prepare for the big game.

With this year’s homecoming game occurring last Thursday, race coordinators decided to pivot their focus towards military appreciation in a number of ways. For one, participants were encouraged to wear plenty of patriotic colors, and the runners came through, as many of them were covered from head to toe in red, white and blue.

Secondly, runners were able to download a free app with simple directions on how to donate $1, through the company Johnson & Johnson, to a military and veterans support organization of their choice.

Finally, the event offered a subtle but resounding reminder of the sacrifice our military men and women make for our freedom. In the center of the pavilion sat an empty table complete with a lit candle, a rose, silverware and a single chair. The display served as a visual reminder that not all of our service people return home safely.

Gemma Skuraton, the health promotion coordinator for Health Services and a director of the event, believed their new cause and the physical aspect of the race went hand-in-hand.

“We think that it’s a good way to give back, especially being that Veteran’s day was yesterday, and physical fitness is such a healthy treatment with psychological trauma and helps with healthy coping to stress, and also it’s a great way to support our military students and their families and our veterans,” Skuraton said.

In addition to supporting military veterans, the True Blue 5k/10k promotes physical fitness in the area. The race offers students and members of the community an opportunity to push themselves towards a goal or possibly try something new. Rodgers believes this is what makes Saturday’s annual race so beneficial.

“A lot of times people may have mental barriers to physical activity, and something like this lets you go out where there’s no expectations on your end result, but at least you’re getting out and moving and trying something new, and it can be beneficial for folks,” Rodgers said.

Runners of all caliber flooded the race’s route. The competitive runners emerged from the pack and looked to finish first, while others challenged themselves at their own pace. Some even walked the course casually, enjoying the brisk morning weather.

For Jared Hubbard, a senior biology pre-med major, running in this type of event is a great way to stay in shape and escape from life for a little bit.

“I was trying to find something I like and I started liking running. Every chance I get to do a 5k or a 10k, I take it now. It releases stress and lets you get out and kind of think and be free for a while and get away from everything,” Hubbard said.

The True Blue 5k/10k is normally one of the biggest long-distance running events in the Statesboro area. However, the homecoming game’s unique scheduling resulted in a decrease in participants this year, as many alumni were no longer in town on Saturday.

“This year with the game being on Thursday, we noticed that a lot of our alumni numbers were really down. Normally, we hit around 400 participants, and this year, we were a decent bit lower than that,” Rodgers said.

Despite this setback, the race still boasted a solid turnout. Although the emphasis on military appreciation was a first this year, Rodgers said that they would consider continuing the theme in the future.