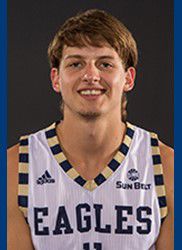 This year, Allstate and the National Association of Basketball Coaches are recognizing men’s college basketball athletes for their outstanding community service achievements.

O’Connell has shown leadership both on and off the courts by giving back to others. He has read books to children at different schools, he participates in Red Ribbon Week yearly, and he has visited the Boys & Girls Club of Statesboro.

Among 181 nominees, O’Connell has a good chance to make it on the final roster of 10 award recipients which will be announced in February.