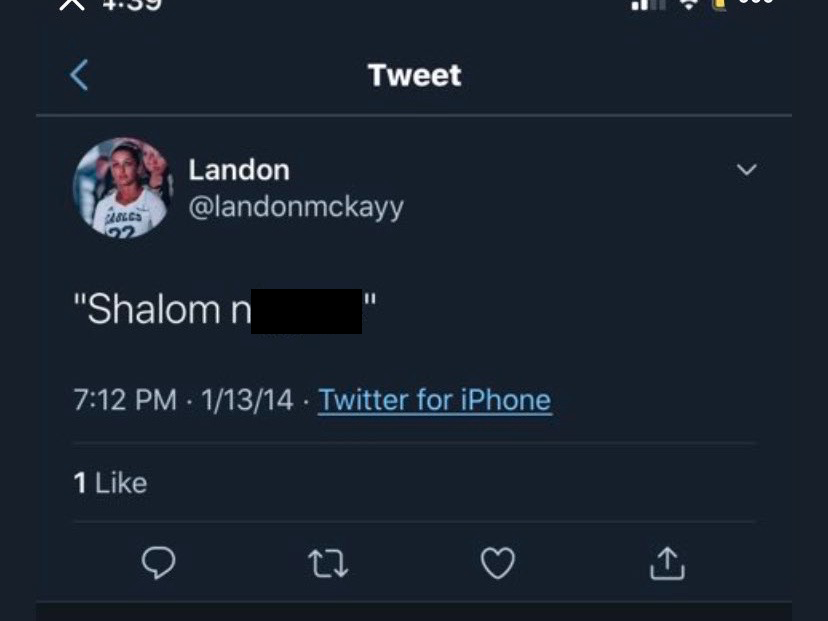 Editor’s Note: The George-Anne acknowledges this image may be upsetting to some readers. Because of this, The George-Anne has decided to black out most of the slur from the image and not use the full word in this story.

STATESBORO — After tweets using the N-word surfaced, a Georgia Southern volleyball player has resigned the presidency of the student-athlete advisory committee (SAAC).

One, replying to someone, said “stfu [N-word].”

The other, appearing to be a quote, said, “Shalom [N-Words].”

“STFU” is an abbreviation for “shut the f— up” and “Shalom” is a salutation used by Jewish people.

In a statement released on the athletic department’s Twitter account, Jared Benko, athletic director, announced Jones met Sunday evening with the SAAC to offer her resignation and apologize.

“While the group accepted her apology, they felt it would be best to accept her resignation,” wrote Benko. “Let me be clear: we do not condone any form of racism in the athletic department.”

Benko went on to say the athletic department is taking steps to create a more inclusive environment, including a diversity and inclusion committee.

On Sunday, Jones released her own statement on her Twitter.

“A lot has changed since I was a freshman in high school and that language does not reflect who I was then and certainly not today,” said Jones. “I take ownership of my actions and apologize to everyone that these words may have offended.”

Jones added she is appreciative of her teammates, the university and the athletic department for teaching her about diversity and equality.

The George-Anne reached out to Jones for comment. We have not yet heard back.

In the comments of Jones’ tweet, some users are proud of Jones’ statement, while others are skeptical.

@GSUtruebluedrew commented, in part, “It takes a strong person to admit their mistakes and I’m glad your experiences have shaped you into a more understanding person!”

Benko added in his statement that the athletic department will now begin the process of finding a new president for SAAC.